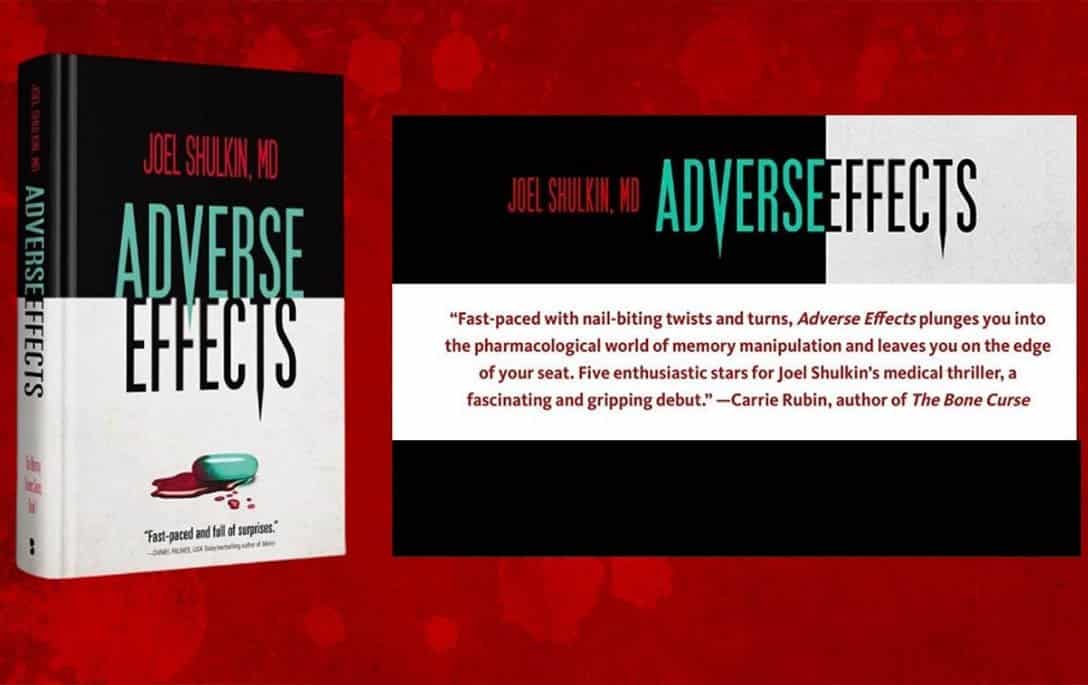 Adverse Effects by Joel Shulkin was released September 2020 by Blackstone Publishing and is now available in hardcover, ebook, and audiobook.

Determined to help her amnesiac patients recover their lives, Boston psychiatrist Cristina Silva is achieving near-miraculous results by prescribing Recognate, a revolutionary new memory-recovery drug now in trials. She understands her patients’ suffering better than most because she’s lost her memories, too. Desperate to become herself again, she pops the same experimental drug she prescribes to her patients. And, like them, she remembers a little more each day.

Until one of her patients, a successful accountant jumps from an eight-story window to his death. And as Cristina’s memories return, with them come violent visions and an incessant voice in her head. Maybe the drug isn’t safe after all. But discontinuing it would mean forgetting everything she’s recalled and losing herself.

Then an enigmatic, possibly dangerous man appears at Cristina’s bus stop. He seems to know more about her life than she does and says she holds a secret that puts her life in danger. Perilously balanced between an unknown past and a terrifying future, if she wants to survive, Cristina must stay on the medication and unlock those memories before it’s too late — even if the adverse effects of the drug could destroy her.

”Fast-paced and full of surprises. Authentic medicine and plenty of suspense makes Adverse Effects one heck of a debut thriller.” —Daniel Palmer, USA Today bestselling author of Mercy and The First Family

Joel Shulkin, MD, is a developmental-behavioral pediatrician and the United States Air Force veteran with a master’s in public health. Having been lucky enough to be mentored by the legendary Michael Palmer, his short stories have appeared in various print and online journals, and he has won several national and local writing awards for fiction and poetry. He lives in Florida with his wife and twin daughters. You can find out more on his website and here!

Are you ready for this novel? Want to get your book feature? Contact me! Also, don’t forget to check out my feature on Feedspot’s Top 100 YA Book Blogs!

You Should See Me in A Crown by Leah Johnson Review