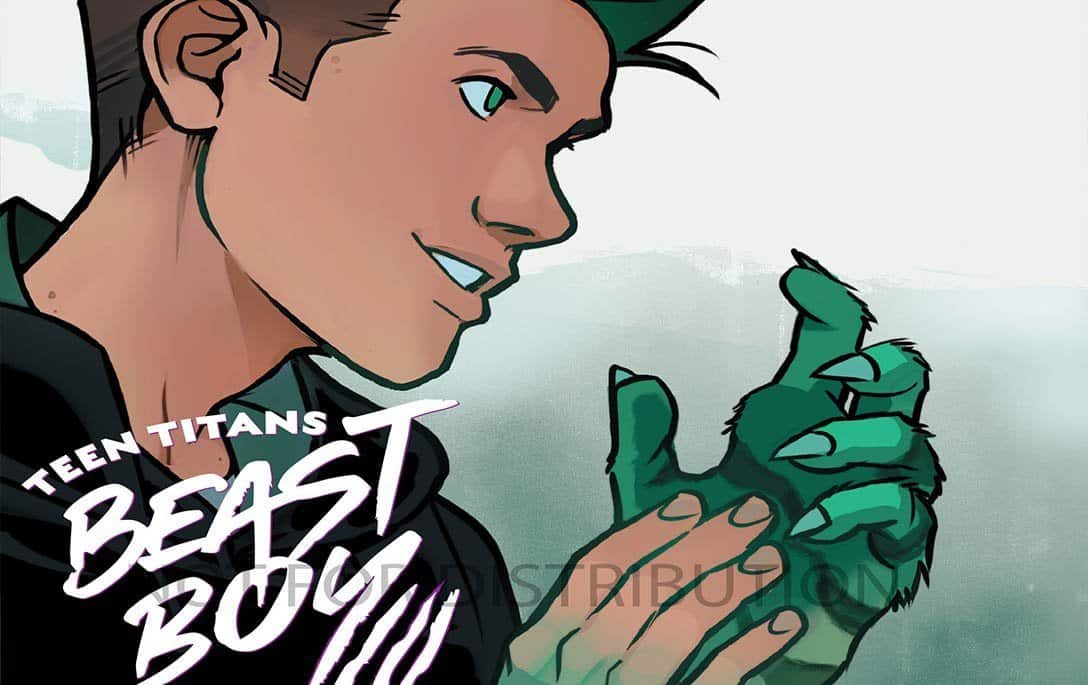 From #1 New York Times bestselling writer Kami Garcia and Instagram superstar artist Gabriel Picolo, the dynamic duo behind the smash hit Teen Titans: Raven, comes the exciting next entry in the Teen Titans series, Teen Titans: Beast Boy. This new reimagining of Beast Boy’s origin story follows 17-year-old Garfield Logan as he takes on a dangerous set of dares in an attempt to get in with the popular crowd and win over the girl of his dreams. But when he starts going through an unexpected transformation, he discovers the savage truth about himself and who his real friends are.

Teen Titans: Beast Boy is a thrilling coming-of-age story about growing up…in more ways than one. This original young adult graphic novel is aimed at readers ages 13+ and examines themes like finding out who you really are, dealing with the pressure of societal expectations and wanting to be popular, finding your true friends, and unleashing your inner beast. Teen Titans: Beast Boy hits stores everywhere books are sold on 9/1/2020.

Garfield Logan has spent his entire life being overlooked. Even in a small town like Eden, Georgia, the 17-year-old with green streaks in his hair can’t find a way to stand out. And Gar is determined to find a way to impress the social elite at Bull Creek High School. Gar’s besties, Stella and Tank, can’t understand why he cares what other people think, and they miss their funny, pizza-loving, video game-obsessed friend. When Gar accepts a wild dare, he impresses the popular kids, and his social status soars. But other things are changing, too. Gar grows six inches overnight, his voice suddenly drops, and he’s stronger and faster. He’s finally getting everything he wanted, but his newfound popularity comes at a price. Gar takes on bigger and bigger dares and the stakes keep getting higher. When Gar realizes the extent of his mysterious physical changes, he has to face the truth about himself—and the people who truly matter—before his life goes roaring out of control.

Kami Garcia is the #1 New York Times, USA Today, and international bestselling co-author of the Beautiful Creatures and Dangerous Creatures novels. Beautiful Creatures has been published in 50 countries and translated into 39 languages. Kami’s solo series, The Legion, includes Unbreakable, an instant New York Times bestseller, and its sequel, Unmarked, both of which were nominated for Bram Stoker Awards. Her other works include The X-Files Origins: Agent of Chaos and the YA contemporary novels The Lovely Reckless and Broken Beautiful Hearts. Kami was a teacher for 17 years before co-authoring her first novel on a dare from seven of her students. She is a cofounder of YALLFest, the biggest teen book festival in the country. She lives in Maryland with her family.

Gabriel Picolo is a Brazilian comics artist and illustrator based in São Paulo. His work has become known for its strong storytelling and atmospheric colors. Picolo has developed projects for clients such as Blizzard, BOOM! Studios, HarperCollins, and DeviantArt.

About DC’s YA Graphic Novels

DC’s young adult graphic novels introduce DC’s most iconic Super Heroes to a new generation of fans with stories told by some of the most successful authors from the young adult publishing space. The YA titles are standalone stories, not part of DC’s ongoing continuity, and completely accessible to new readers who have no previous knowledge of DC characters.

“Garcia’s ambitious origin story of a Teen Titan is funny and unequivocally feminist. Picolo’s gorgeous illustrations are dynamic and nuanced. Lovers of superheroes will appreciate this complex origin story.”

“Well-paced and thrilling; readers will fly high with Raven’s tale.”

“Picolo’s spare, effective use of color and slightly edgy art helps situate the story in a supernaturally tinged world of high-school drama. …Garcia’s exploration of the connection between memory and identity offers a promising entrée to the Teen Titans series.”

“Teen Titans: Raven takes all the best traits of both comic books and YA lit and merges them together to create an evocative and exciting origin story.”

“Relatable to its intended modern audience but true to the spirit of the character, Teen Titans: Raven is a refreshing and entertaining take on teen heroism that builds a solid foundation for future stories.”

“the creative team approaches the source material with a balance of reinvention and reverence to retell Raven’s beginnings…in a spellbinding tale that is sure to please longtime fans and unfamiliar audiences alike.”

“Kami Garcia has taken an iconic Teen Titans character and turned her into a beautiful warrior. Garcia has brought wonderful depth to this Teen Titans powerhouse.”