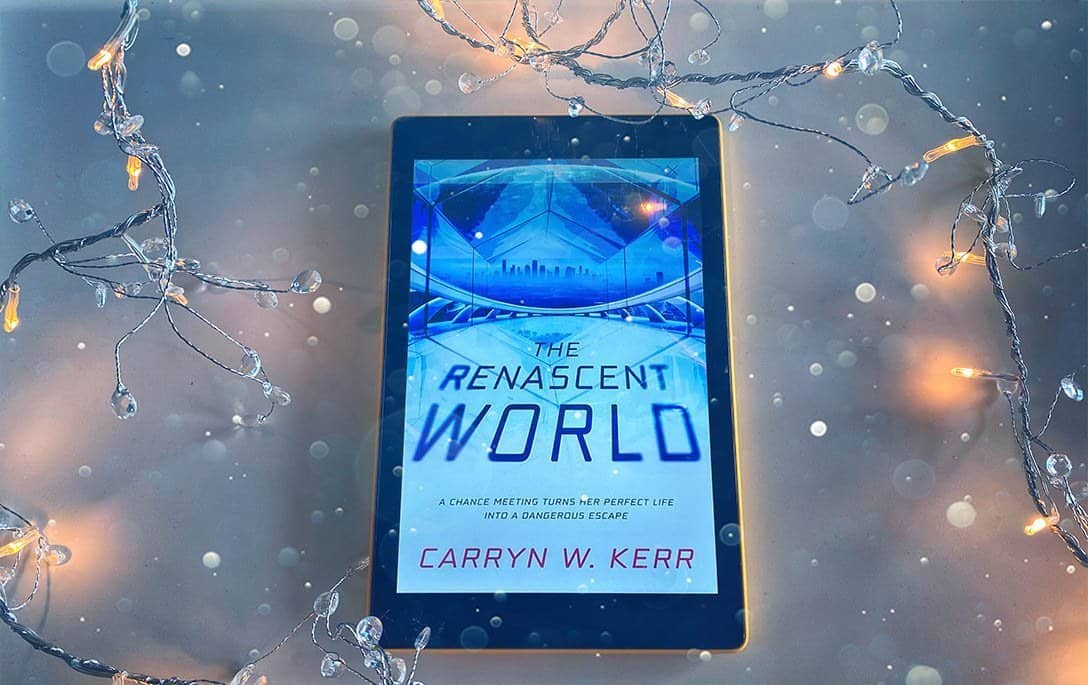 The Renascent World by Carryn W. Kerr is out now!

Cassidy Jones was five years old when her parents escaped Earth with her and her brother. They were safe in Earth’s orbit in the town of Petriville—hovering at the center of an indestructible sphere—when the meteor impacted Earth and killed Cassidy’s grandparents, aunt, and cousin.

But now, eleven years later, Gina Petri, Petriville’s founder, assigns a mate to each youth. When Cassidy refuses to participate in this forced mating, her dissent places her and her family in Gina’s firing line. This becomes especially pertinent when Cassidy enters a communication pod and meets an alluring hologram. Eric isn’t in Petriville, and he insists Gina will murder his people if she discovers their existence, because he is one of Earth’s few survivors.

The more Cassidy gets to know Eric, the more she’s drawn to him—and the feeling seems mutual. He has lost so much in his life, and her compassion for him runs deep. Despite the intensity of the static electricity when Cassidy and the hologram of Eric touch, she yearns for the day when she will meet him in person.

All the questions will be answered when Petriville returns to Earth, and that day is quickly approaching…

Not only did I love the character of Cassidy Jones. I loved the character of Eric and watching their relationship play out. It was amazing. The action in this novel was great, too, as well as the post-apocalyptic storyline. I find it hard to select original, fun, romantic, and action-packed post-apocalyptic books that incorporate a whole new world. But Author Carryn Kerr delivered in her novel. Kerr had a way of putting her character in situations that leave the reader on the edge of their seat. I couldn’t put it down until the end.

Carryn W Kerr is a young adult fiction author. She enjoys a deep love for any and all things related to the English language and likens stories to the rainbows of a sometimes cruel world. The idea that her characters always existed is something she often contemplates, and she finally got to meet them when she wrote their stories.

One of her greatest pleasures is escaping to the fictitious realms that develop in her heart and mind.
Carryn began the adventure of life in a small South African village in the province of Kwa-Zulu Natal.
When she isn’t writing, she can be found working out in the gym, running, or riding Mr. Fantastic, her horse whom she believes doubles as her muse.

Carryn lives with her husband and son in Johannesburg, South Africa, while her married daughter is on the beautiful island of Zanzibar.

Below is an exclusive excerpt!

The fireball and tail shot across the sky, its speed impossible, incomprehensible as it burned through the atmosphere toward Earth. It barely lost any of its immense bulk as it neared, and only a moment later, the enormous bulk slammed into Earth’s surface, throwing a circle of light and dust into the air. With it, an ethereal brightening seared the dark sky, and after what seemed like the longest time, the light faded into a shimmering mushroom of debris which began raining back to Earth as if in slow-motion.

From our viewpoint in her orbit screams all around me shattered the night, an echo in a chorus of onlookers’ grief. All I heard as the young versions of my parents collapsed to the ground was Mom, comprehension slamming into her and Dad. They had just lost almost everyone they loved.

Searing pain tore into my gut. I clenched my fists until my fingernails bit into my palms. I barely noticed that I was clinging to Liam, that he held me against him, his arms as tight as the vise gripping my heart, that I shook, sobbed, and that tears slid down his cheeks too. My parents’ continued screams cut a burning, stabbing pain through my chest, constricting my throat. But I couldn’t drag my eyes from them or escape the suffocating Virtual Experience. My body numbed. A weighted, nauseated, distant dream took hold. I tried to lift my hand to wipe at the tears burning my cheeks, but my hand wouldn’t move. The VE faded into the swirling mist then slid away. We were back in the room with the familiar leather couches. After the longest time, Liam loosened his grip, and I stepped away, wiping my cheeks.

Liam kept his eyes on me. “Are you all right, Cass?”

A choked “Why would they make us—?” was all I managed as my tears gushed.

Some fell onto my wrist, splashing Grandma’s antique, white-gold wrap-around bracelet pen, and the sixteen silver sparkle bangles Mom and Dad had given me that morning. My ‘Age of Understanding’ gift. Sixteen. The old maxim really applied to me. But it felt back-to-front, like the soft sensation of a boy’s lips on mine should have preceded what I’d just witnessed. And it wasn’t for lack of wanting. I yearned to be in the arms of a boy tasting his soft, sweet lips. But I hadn’t yet met the boy who had recently begun starring in my dreams—the boy with eyes the color of a tropical ocean, dimples etched into his cheeks, and the body of an athletic Greek god. He most likely didn’t exist, but he had ruined me for anyone else.

Another single, soft word made its way through my lips. “Why?”

Liam absorbed my gaze. “Not witnessing this doesn’t erase nor diminish what happened. Don’t you think this a fair way to honor the people who lost their lives?”

The words scraped through my throat. “I thought that was what our annual ‘Extinction Day’ commemoration was for.” I hated the crass term. It didn’t sound at all like an honor. Instead, I added, “I hate Gina for terming it something so cold.”

Liam took my hand. “You shouldn’t worry about her, Cassidy. She’s just a crazy old bat.”

Although it wasn’t his fault, I glared up at him. “Are you sure that’s all she is, Liam? Because I’m not.”

A Week at Surfside Beach by Pierce Koslosky Jr.