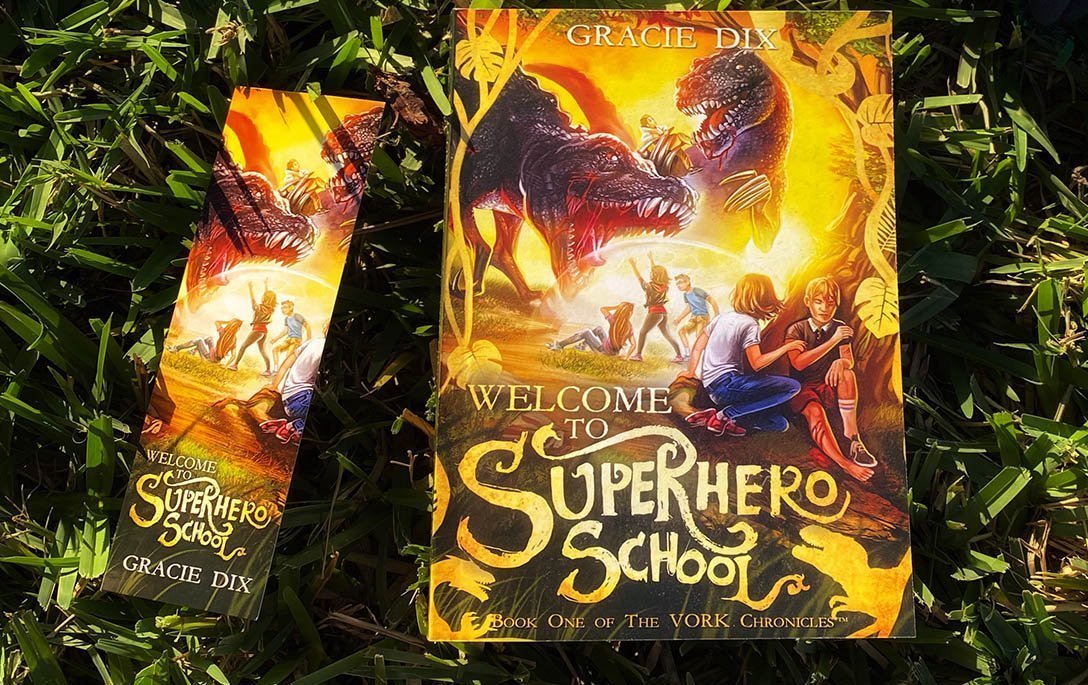 Welcome to Superhero School by Gracie Dix is out now!

This debut novel by author Gracie, follows siblings Oliver and Jessica, along with their friends, on a mission to destroy the power-hungry villains of Vork. With their collective powers of flight, morphing, invisibility, mind reading, and more, the friends journey together through hardship and humor to take their abilities to new heights and gain a deeper understanding of their own place in the world.

Inspired by an online writing contest, Dix wrote Welcome To Superhero School with the intention that each character would need to lean on the others and learn from their collective differences in order to overcome obstacles and evil. The same can be found in the real world–when we put ourselves in each other’s shoes, help one another and embrace our uniqueness, we are better able to face challenges and have more empathy for others.

Gracie Dix is a high school author who, when she isn’t writing, can be found singing, creating art, acting in the theatre, volunteering, or playing tennis. She loves to travel and is a loyal friend. Gracie lives in Dallas, TX with her parents, brother, and beloved dogs, Snowball and Sandy.

I have to say Oliver and Jess are my new favorite characters. I love the world Gracie built and how her characters are trying to overcome the villains of Volt. Her imagination shines in this original story, and she conveyed very vibrant characters. The story was gripping and had me pulled into their journey. Not every author can do that, but Gracie did, and I found myself unable to put the book down. I recommend reading this book if you are looking for a fun fantasy book to read. Find out if Oliver and Jess can overcome the villains and survive!

EXCERPT FROM WELCOME TO SUPERHERO SCHOOL

“Oliver? What are you doing here?” Jessica asked through the door. She was astounded and shocked he was still there. “You should be out of the school.”

Yes, the smoke was making his nostrils burn and his eyes sting and water. He could no longer hear any other kids in the hall. It was just the two of them. Alone. All of a sudden, he heard a crash and a shriek coming from the bathroom!

Oliver didn’t hear a sound. He decided to take the risk, and he threw the door to the Girls’ bathroom wide open. But as soon as he entered, he almost passed out from the scent of ash, smoke, and stale air. He rushed around the corner as soon as he recovered to find poor Jessica putting all her strength into her Force Field. She didn’t know he was there yet, and he didn’t want her to know because that would distract her. Welcome to Superhero School 13

Oliver Flew up to the concrete roof that was about to fall on his sister, and with all the strength he had, he began lifting the ceiling away from her.

“Go!” Oliver managed to choke out, grunting from the strain on his weak arms. He could see stars, black splotches, blue splotches, and red.

Jessica sprinted out of the bathroom and Super-Sped down the long, burning hallway to the front door.

“MY BROTHER NEEDS HELP! PLEASE, HELP,” Jessica screamed. “Please. He’s in the Girls’ bathroom,” she said more weakly. The strain and reality of the situation finally slammed her right in the chest. Her brother could be dead! And if he weren’t dead already, then he soon would be. She passed out cold.

Three minutes later, Oliver was beginning to lose what little strength he had left, as he desperately tried to inch out from underneath the gigantic piece of concrete before it crushed him. He suddenly heard a faint voice. It sounded distant, as if Oliver were in outer space.

Oliver felt the weight lift off him and he felt himself falling. But he wasn’t just falling down; he was falling prey to the deep, black darkness.

As soon as Teddy heard Jessica, he couldn’t suppress the urge to help. He and his girlfriend, Ondrea, Teleported to the hall in front of the Girls’ bathroom.

“So, we might as well figure it out when we get inside,” Teddy said very quickly.

“One, two, three!” Teddy counted and in they went. Instantly, Teddy saw Oliver shifting out from underneath burning-hot concrete.

“I got this!” Ondrea insisted. She Levitated the ceiling chunk off of Oliver, and Teddy raced forward to catch him before he slammed his head on the stone floor.

“Huh?” Oliver groaned, refusing to completely black out. He started moving and looked up to see Teddy’s concerned face staring down at him.

“Are you okay, Oliver?” asked a girl’s voice.

“No,” Teddy’s voice said. “That would be my beautiful girlfriend, Ondrea.”

“Jessica passed out. But she’ll be okay, and so will you,” Ondrea said. “By the way, that was very impressive! You don’t even have Super Strength as one of your Powers!”

“I don’t feel like a hero,” Oliver gasped weakly as he went into another coughing fit. Then everything went dark.

Get your copy today from Amazon or GracieDix.com TODAY. Connect with Gracie on Instagram and Facebook too! This is one story you definitely don’t want to miss out on!