But without further ado, let’s welcome author Matthew Norman to my blog!

Last Couple Standing has been deemed hilarious and heartwarming. Tell us more about it.

There’s a tight-knit friend group made up of four couples. They all met in college, but they’re in their early forties now. Over the course of a year, three of the couples get divorced. That leaves Jessica and Mitch Butler: the…well, the last couple standing. In an attempt to avoid the fates of their befallen friends, Jessica and Mitch decide to bend the most basic rule of marriage. Things quickly get complicated.

What inspired you to craft the story in Last Couple Standing?

Like Jessica and Mitch, my wife and I are part of a big group of couple friends. I was out with some of the husbands a few years ago. A question came up over drinks: “What if one of us got divorced?” For the next hour, we imagined a domino effect—like a marital apocalypse—one couple falling after the other. That seemed like a fun book to write.

Did you have a favorite character in this novel?

I had two: Jessica and Mitch. I just love them. They represent what it’s like to be in your early 40s in the 21st Century. On one hand, they’re accomplished, reasonably happy adults. On the other, like so many of us, they have no idea what they’re doing.

Is there one part of Last Couple Standing you cannot wait for readers to read?

I’m really proud of the last few chapters. Not to give away too much, but all of the storylines come together in a single climactic scene. It was difficult to write, and it took a ton of planning to figure out, but the response so far has been fantastic. 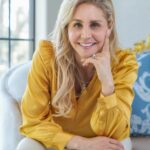 Early on, I settled on the title How to Save Your Marriage. A little nod to self-help books. Then I ran into my writer friend Jessica Anya Blau at a coffee shop here in Baltimore. I told her what I was working on and about my title. She was like, “No, I don’t like that. It should be Last Couple Standing.” I immediately thought, “Well, duh.”

I hear you have a new book coming out this summer, called All Together Now. Can you tell me a little bit about it?

June 15, and I’m so excited about it. When a 35-year-old hedge fund billionaire discovers that he’s dying, he invites his oldest friends to the beach to say goodbye. Even though they’re all best friends, they’ve been keeping secrets from one another. Everything comes out in one epic weekend. It’s my beachiest book to date.

Before I let you go, tell us, did you always want to be a writer?

Definitely, when I was a kid, I used to write stories and read them aloud to my parents. I worked in advertising for 20 years. I enjoyed it, and it was a good way to have a salary and health insurance. But I’ve only ever wanted to be a novelist.

Get your copy of Last Couple Standing on Amazon today!

Did you enjoy today’s interview with Matthew Norman of Last Couple standing? Be sure to comment below and let me know!

Are you an author, publisher, or publicist? Want to get an author interview? Contact me! Also, don’t forget to check out my feature on Feedspot’s Top 100 YA Book Blogs!