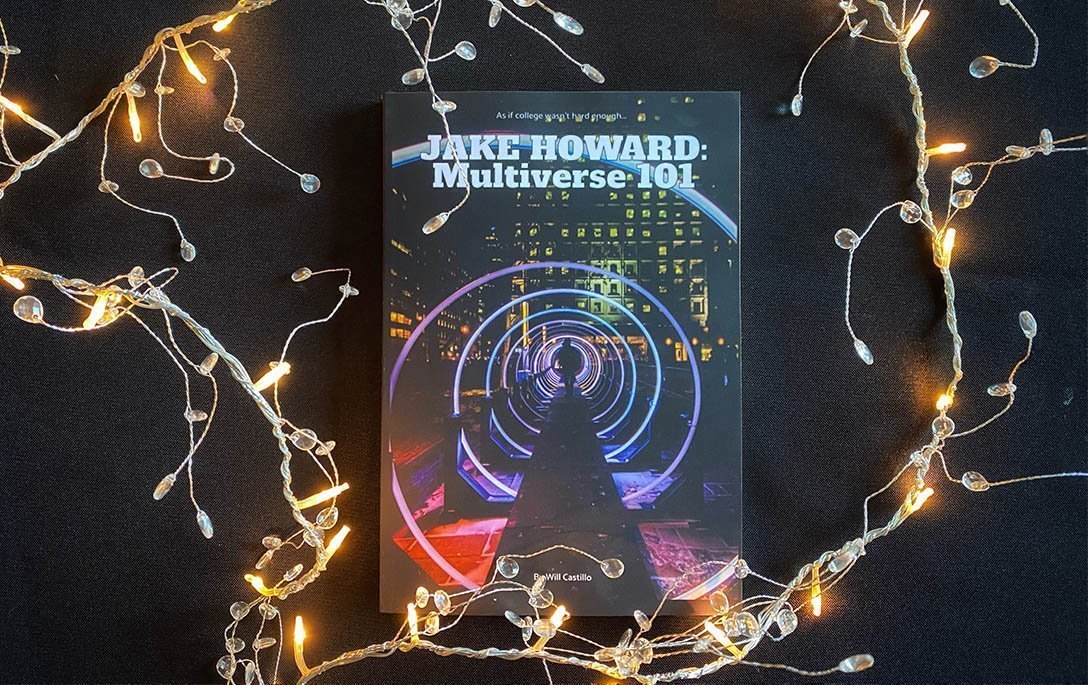 Jake Howard: Multiverse 101 by Will Castillo is out now. This debut novel was released in October to favorable reviews on Amazon and Goodreads. Taking place near the author’s hometown in Upstate New York in 1997, the book tells the story of how the titular character has his world turned upside by an event in his past colliding with a meeting in his present day.

On a class field trip to Mohonk Mountain in ninth grade, Jake Howard encountered a strange glowing portal that was gone in a flash but was burned into his memory forever.

Now, in 1997, Jake is about to start his junior year at SUNY New Paltz. He is rooming with his best friend Scott and coming off of a bad breakup when he meets Beth. Beth is brooding and mysterious and, despite Scott’s weird feeling about her, Jake finds himself attracted to her. Little does Jake know his understanding of the universe is about to be shattered when he discovers Beth has ties to the portal on the mountain.

I have to say I really enjoyed Will’s debut novel. It was fresh, fun, and unique. He created a world that, to me, was unlike any others I’ve read about. The idea of finding a mysterious portal while out on a field trip was one of my favorite parts. As many of you know, I love fantasies that are depicted in reality. Therefore, I really liked how you could go on a field trip only to be transported through a portal. There is also romance in the novel, which is always a plus! I definitely recommend reading this novel. My favorite part was how Will was able to show what happens when you make a decision and how it has a ripple effect in the universe.

I am also super excited to share an exclusive interview I got to do with Author Will Castillo!

1. Tell us about yourself. How did you get started writing?

I am a married father of twin daughters that has always been into fantasy and science fiction. I’m a lifelong gamer, comic book, and movie buff and have always wanted to write a novel. It took me a while to find the written story, though, nearly ten years!

2. What inspired you to write JAKE HOWARD: MULTIVERSE 101?

I’ve always loved the concept of a multiverse, alternate universes, different possibilities, things like that. Over the years, I’ve always wondered what my life would be like if I made different decisions. The job that I was working at when the idea struck me for this book was easily one of the worst jobs I ever had. I was standing in one spot for upwards of ten hours a day for 40-50 hours a week (you can probably connect the dots and figure out where it was) and I was wondering what decisions I had made in my life to wind up at the job that was definitely the lowest I had ever been both mentally and physically. That’s when inspiration struck.

3. Have you always loved fantasies? If so, did one inspire you to write this novel?

Yes! I’ve always loved fantasy, and there is absolutely one book that inspired me, Ready Player One by Ernest Cline. I love that book. I’ve re-read and listened to the audiobook multiple times. I feel like Jake’s narration shares similarities with the main character of RPO, Wade Watts. My daughters actually pointed that out to me, and when I was proofing the audiobook version of my book (that is releasing very soon), it sounds like it is in the same vein.

4. Do you have any advice for other indie authors?

The biggest advice I can give is don’t get overwhelmed. When I started writing, I didn’t realize how much goes in AFTER the first draft is done. Between editing, cover design, marketing, getting the word out there, and everything else, it can really stress you out. Take a minute and breath before moving to the next step.

5. What’s your process like when writing a chapter? Do you brainstorm with others? Alone? Do you have to be in a specific spot to come up with an idea?

When I first started writing JAKE HOWARD: MULTIVERSE 101, I didn’t have a clear outline. I knew what I wanted to say, but I wasn’t quite sure how to say it. In my first draft, after I hit chapter three, I think, I put a quick one-sentence blurb in each chapter to generally steer my path. There were a few beats that happened earlier or later just because of what was going on and where things would fit better, but for the most part, I stuck to my outline.

For some of the conversations, I bounced them off of my daughters, who helped me iron out some things, and my editor, Anastacia Carroll, is an angel. She helped me so much flesh out some scenes that just needed a little bit of shine.

6. Finally, how did it feel to complete your first novel?

It felt amazing! Finishing my novel felt like such an accomplishment. Last week was actually the one year anniversary of me completing the first draft, and I had the final version done by the end of September. Right now, I am currently working on book two because there is a lot more story to tell for Jake and his friends!

Kansnubra Island and the lost portal by Andrews Ulisses