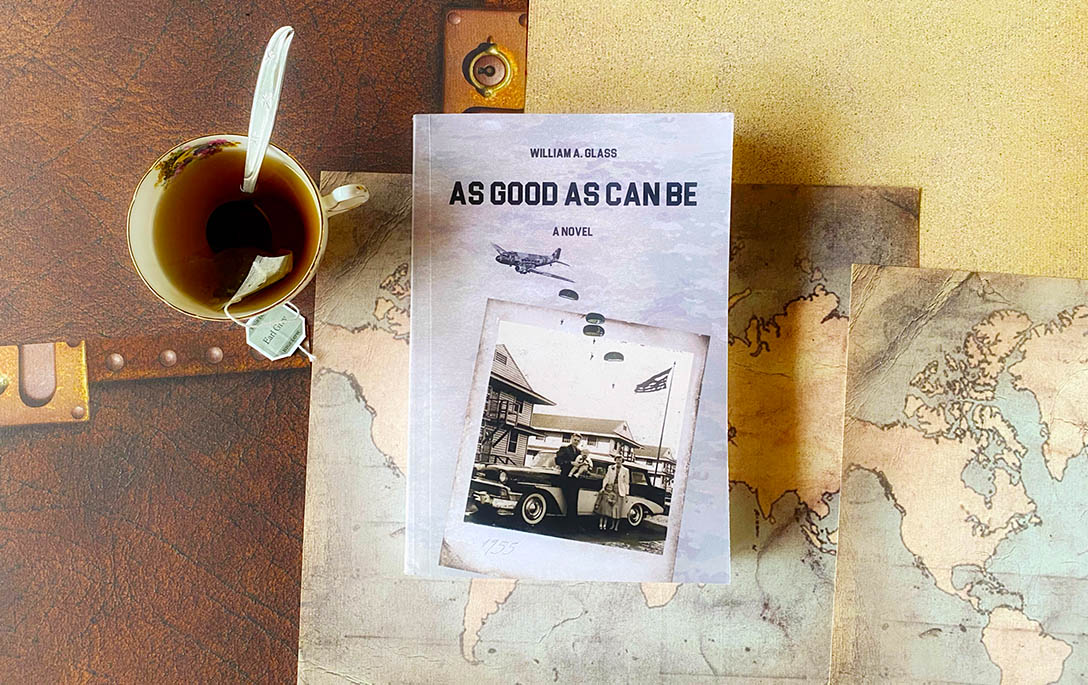 As Good As Can Be by William A. Glass is out NOW! When we first meet the Knight family, it’s 1952 and they’re living the good life in a suburb of Tehran.  The mansion they occupy comes complete with servants, a swimming pool, and a stunning view of the Alborz Mountains. Lt. Colonel Knight, a US Army Signal Corps officer, is charged with intercepting Russian military radio traffic. His wife Bobbie is recuperating from her fourth trip to the delivery room.  Whenever Knight’s asked why they had so many kids, his stock reply is, “Too many cocktail parties.”  He’s an alcoholic.

Aside from trying to figure out where his next drink is coming from, Knight worries about his son, Dave.  The boy is only five years old but already appears backward. Knight’s losing hope of ever getting him into West Point.

Knight’s oldest child, Melissa, is everything Dave isn’t. She’s a bright student who obeys her teacher and colors between the lines. Melissa hates Dave and wants to kill him.

Just as we get comfortable with the direction this family saga is heading, the Knights move. For those who grew up in the military or ever served, this development will come as no surprise.

As the Knights move from one army base to the next, the story comes to focus on Dave. He’s thought to be slow-witted and is bullied by one and all. Early on, Dave learns to read and escapes into a world of books. Over time, he develops a give-a-damn attitude and an ironic sense of humor.

In high school, Dave becomes the class clown and is accepted by other delinquents. He joins them in a series of escapades, some dangerous, others funny, and a few that would be worthy of jail time should they ever be caught.

After barely graduating, Dave finds a job in the suburb of Washington, DC where the Knights currently reside. The mid-sixties are a great time to be young and Dave takes full advantage. But the good times are cut short by a letter from the county draft board.

The army sends Dave to guard a nuclear weapons depot in Korea. It’s a poorly run unit headed by an officer who spends most of his time with a donut dolly. The sergeants are more interested in shacking up with local business girls than securing the nukes. Still, Dave’s rebelliousness goes too far even in this slack outfit. He runs afoul of his platoon sergeant and now must try to avoid dishonorable discharge.

William A. Glass grew up in an army family.

His earliest memories are of attending school in the basement of the US embassy in Tehran. In this 1952 photo, Bill is second from right standing in front of several Iranian nursemaids. His brother and two sisters are also in the picture.

Bill attended 18 schools between kindergarten and 12th grade. After high school, he worked, then was drafted into the army. Later, he settled into a business career rising to the position of VP at Gallup. Along the way, Bill earned a BSBA from the University of Maryland.

Today Bill and his wife, Bettina, live in rural South Carolina.  He coaches soccer at a small college while she teaches high school German. Their three sons, Alex, Robert, and Gordon have all graduated from college and moved away to pursue careers. Now Bill and Bettina enjoy long walks with their dog, Scout. When the weather permits, Bill commutes to work on two wheels.

Overall, I really enjoyed the authenticity of this novel. Author William A. Glass brought his knowledge of being in the army and interwoven it into a beautiful story that grips you and, at times, tugs at your heartstrings. It is hard to write historical novels while staying true to the times and keeping the reader engaged. But Author Glass achieved both of those things. I definitely recommend getting your copy of this novel. It won’t disappoint. The amount of thought and research the author put into this novel makes it shine!

You can get a copy of the book on Amazon or Barnes and Noble. You can also follow the author on Instagram and Facebook. Author William A. Glass also has his own o learn more!

For The Best by Vanessa Lillie

The Inn by James Patterson Review