The Archer’s Diary by Liam Cadoc 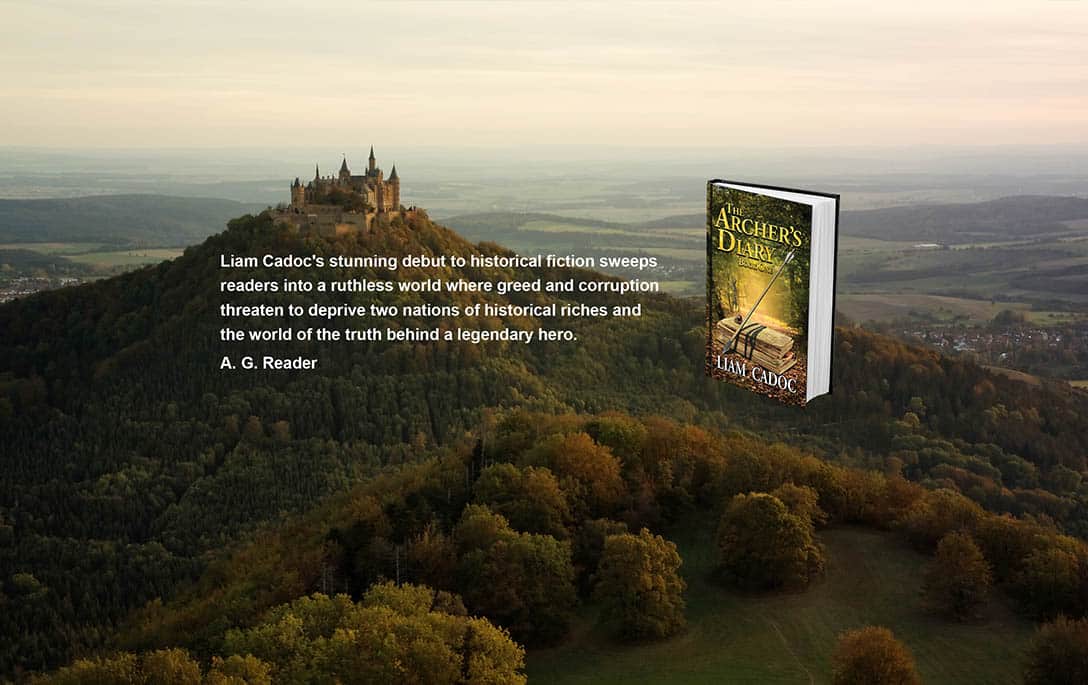 The Archer’s Diary by Liam Cadoc is on pre-order NOW.

THE LEGEND IS REAL

Since the 14th century, Robin Hood has proven to be one of the most enduring and versatile folk heroes. Medieval historians believed Robin lived during the 12th or 13th centuries, but despite decades of intense research by contemporary scholars, solid evidence has never been found.

A few weeks prior to celebrating his 21st birthday, Logan Daggett, son of Donald Daggett, well-known CEO of one of Australia’s largest wine producers, is informed of his parents’ death in an automobile accident while on a business trip in England. And the day of his birthday, Logan buries his parents while all the townsfolk of Mudgee gather to pay their condolences. No sooner is the service over than the family’s financier approaches Logan and hands him the key to his mother’s safe deposit box per her instructions prior to her departure for England—”The way she spoke sounded like she expected something to occur, but I never thought . . . “.

Curious, his mother had kept the existence of the deposit box secret from everyone—even from her husband, Logan, and his best mate, Gavin, an Aborigine, claim the contents of the box in town and collect the mail from the post office before returning to the family homestead. Logan and Gavin are surprised to find amongst the mail, a mysterious envelope posted from the United States. The letter inside stuns both men with news that has been kept secret from the family for over 20 years. Not only that, but the writer also infers his parents’ death was no accident. To further confound them is the discovery of an ancient key and a letter from Logan’s mother, the only contents of the safe deposit box. The letter confirms the identity of the American and states the key belongs with the collection the person is bringing from the States.

This series of events contrive to change the course of Logan’s life forever.

The stranger arrives in Sydney and provides proof of identity that Logan cannot refute. And the old key opens a pirate-style old chest filled with ancient artifacts once owned by his mother. It soon becomes obvious a trip to England is needed, and Logan, Gavin and their new friend set out to uncover the truth behind the accident that irrevocably changed his life and to research the authenticity of the priceless heirlooms bequeathed to him by his mother, completely unaware of the adventure and dangers lurking around every corner.

During the course of their journey, they uncover irrefutable proof the legendary Robin Hood is real. A 900-year-old heirloom holds the answers to all the questions ever asked about Robin Hood – even his origin and real name. Evidence that causes further turmoil among the family, sparks controversy among medieval scholars worldwide, and the potential of sparking upheaval to a country’s history and creating conflict between two nations.

Liam Cadoc’s stunning debut to historical fiction sweeps readers into a ruthless world where greed and corruption threaten to deprive a nation of historical riches and the world of the truth behind a legendary hero.

This is Book 1 of a 2-book set. Until ARCs are available, interested readers can pre-order ebook copies at  https://books2read.com/b/The-Archers-Diary Also, the author is running a promotional giveaway on my website … a FREE ebook for the first 50 people who sign up my Exclusive Reader Group.  https://www.liamcadoc.com/

Author Liam Cadoc endeavors to create a feasible balance of historical fact and fiction into his writing in order to meet his obligation, as an author, to his readers. To that end he spends a large part of his conceptual writing on researching the world in which the characters will inhabit. He penned his first fiction while in high school and was quickly recognized by the English staff and his class for his vibrant imagination. He was also a talented artist and, after graduating, followed a career as a graphic designer in the publishing industry compelling him to put aside writing for a number of years.

In 1998, he met his wife-to-be on the Internet when online dating was in its infancy. After 18 months of long-distance romancing, they wed in Sydney, Australia and he returned to America with his wife to begin a whole new life together. Now retired, Cadoc has the time to return to his beloved writing and has spent 9 years working on THE ARCHER’S DIARY, his first historical fiction novel. He enjoys bare-bow target archery, reading, writing, kayaking, movies, traveling, and doing the occasional commissioned portrait of pets or people. He currently lives in central Florida with his wife.

The Markings by Catherine Downen