Everville: The Fall of Brackenbone by Roy Huff 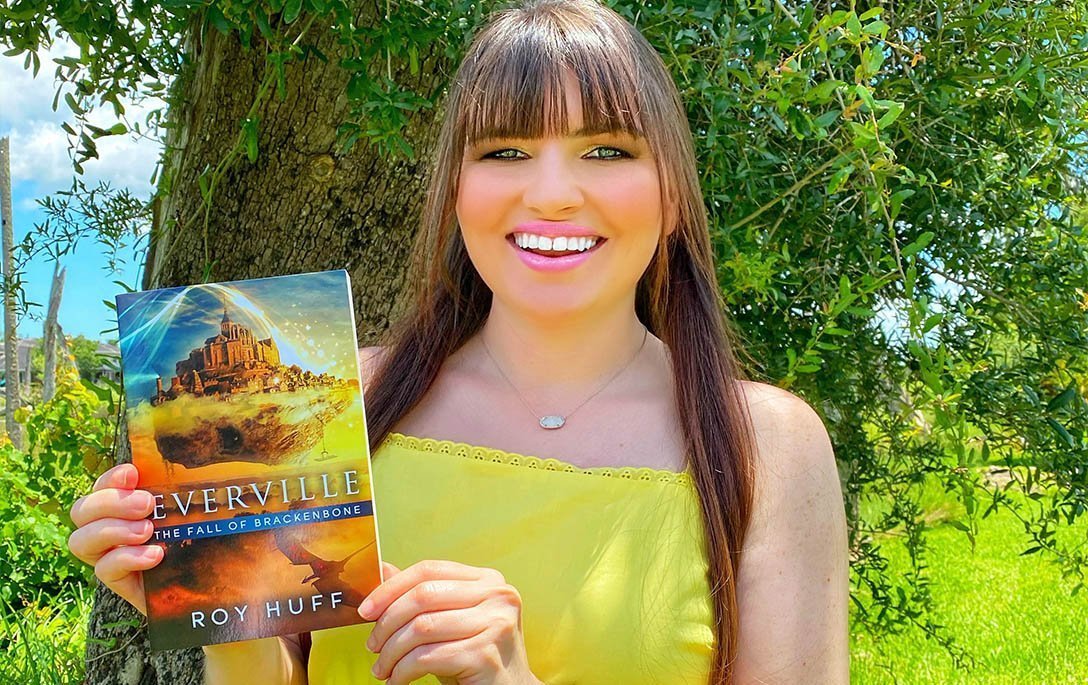 Everville: The Fall of Brackenbone is out now!

Two very different worlds, Easton Falls University and the magical realm of Everville, are in dire need of a hero. Owen Sage embarks on an epic journey of monumental proportions to save these worlds, all while fighting to keep the world within himself intact. This quest is not for the faint of heart, nor is it for the weak of mind—only the bravest will succeed.

Discovering the well-kept secret of The Fourth Pillar of Truth is only part of the feat. Owen will have to outwit the ever-powerful villain Governor Jahal and overcome countless other challenges along the way. Amongst all of the dragons, giants, and grand chaos, will Owen’s acquired skills and wisdom be enough to save both worlds, or will peril be the ultimate fate of all?

Everville was a fast read for me. I loved the plot. It was fun, and the characters of Dante and Anika were my favorite. The chapters weren’t too long either, and the pacing was spot on! I definitely recommend reading this novel. The world-building will make you addicted to turning the pages as fast as your eyes can read!

Roy Huff is a Hawaii-based best-selling author, peer-reviewed research scientist, and teacher. After overcoming significant childhood adversity, he moved to the islands and hasn’t looked back. He’s since earned five degrees, trained on geostationary satellites for NASA’s GOES-R Proving Ground, and written numerous bestsellers. He stumbled into writing, but what he didn’t stumble into is his love for all things science fiction and fantasy.

Later, he contributed a series of fiction and non-fiction books as well as widely shared posts on how to design life on your terms. Despite early challenges, he embraces optimism, science, and creativity. He makes Hawaii his home, where he creates new worlds with the stroke of a pen and hopes you’ll come along for the amazing ride. You can download Roy Huff’s free sci-fi short at https://www.royhuff.net/salvationship

A special excerpt is from Everville: The Fall of Brackenbone is below!

In a realm surrounding Everville, beyond the land of the Fron, Rathlar the dragon made Brackenbone his home. He was no ordinary dragon, he was an Alarian, a shape-shifting species from an alternate universe, and he was capable of great feats. He stood tall like a sulfur-tinged mountain, and strong like the roots of an ancient oak tree. The scales on his body shimmered like an emerald with a thousand facets, and his wings held the power of countless soldiers.

Brackenbone was the perfect home for such a magnificent beast. Its city walls were smelted from the ore found beyond The Walls of Vermogen, and its villages rivaled even those found in Vortmore during its prime.

Hidden behind the rear city gates, Rathlar stood guard over all the land. Should any power-hungry foes attempt to charge The Walls of Vermogen or capture the powerful element stored within, Rathlar would be there to stop them.

The sun hung low on the horizon, dusk about to smother the fading light. This was Rathlar’s cue to depart the city and make his journey to Vermogen. He rested, nestled by the gate in a curled position, calm but alert.

As Rathlar was about to embark on his daily trek, two small figures crept up behind him. Beads of sweat dripped from their faces. Step by step, they made a slow and deliberate approach. They eyed the dragon’s position and timed their motions to coincide with the turns and departure of the massive creature. Armed with a cache of special tools and weapons, they inched their way toward the back entrance of the city, hoping to secretly enter.

Despite their stealth, Rathlar caught a glimmer of the two soldiers in the corner of his eye and sprang into action. He used his powerful legs to thrust his body high above the ground then spread his massive wings, turning in midair to face the trespassers and let forth a deafening roar and a fiery breath that scorched the clothing of those who were too close, filling the air with the smell of ash.

Rathlar lunged towards the group of Ubaloo soldiers and used his shape-shifting power to make the most intimidating face and fiercest growl any of them had ever seen.

Several of the Ubaloo warriors’ knees buckled as they shrieked in fright and fell to the ground. The dirty water raced up the soldiers’ legs, soaking them completely, washing away the stink of sweat and replacing it with the smell of wet mud. In that instant, terror seized the Ubaloo and for a moment they forgot why they were there.

Rathlar calmed his frightful face and allowed his features to melt into a genuine smile. His impenetrable leather skin lifted over his large sharp teeth as the broad grin morphed into a hearty chuckle.

The dragon’s sudden transformation mesmerized the Ubaloo soldiers, who had frozen in place. A chorus of cheerful laughs soon followed.

“Excellent, Rathlar!” shouted the officer in charge of the dragon’s training.  “I don’t think any creature stands a chance against such a mighty dragon.”

Rathlar had begun his training right after he’d parted ways with his former master. Now fully mature, he was an expert of his shape-shifting and fighting capabilities.

Although the notorious Mallory had trained him for the last great battle, Rathlar no longer possessed the immense power of the element that had once occupied his body. It was necessary to train again—taking into account his new limitations and the unique needs of Brackenbone and its inhabitants— protecting the city built around the Ubaloos’ small stature, and defending The Walls of Vermogen. It was The Walls of Vermogen that prevented the element from falling into enemy hands.

Several small Ubaloo soldiers walked behind Rathlar and stared up at him, allowing the dragon’s presence and immense stature to comfort them. Rathlar’s training with the soldiers had been extensive and long. It lasted years in Everville time, but it wasn’t until today that the Ubaloo general felt satisfied with the dragon’s training.

“Break off. Time to eat,” one of the officers said in the distance after an exhausting day of training, smelling of sweat and satisfaction.

Hundreds of miniature Ubaloo swarmed around Rathlar, waiting for their hefty rations of food. He welcomed their presence as they all rested and feasted upon the spoils of a hard fought day.

Girl in The Blue Coat by Monica Hesse Review