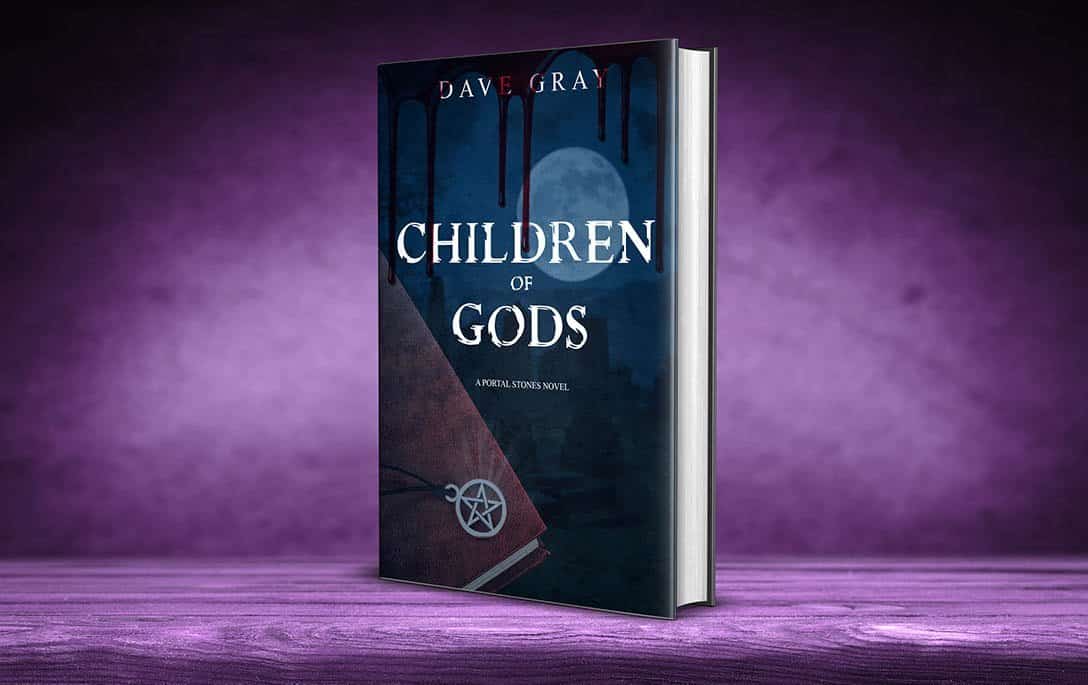 Children of Gods by Dave Gray is out now!

The stability of the realm of Castland is under threat. Still recovering from war with Raska to the east, border strife is bubbling with Barralegne to the west. Far to the south, across the sea, the desert people of Altanya are preparing their war machine, perfecting weaponry, which could change the balance of power.

But the threats do not only come from without. The people are unhappy, and their discontent is stirred by demagogues seeking to install proper democracy in the land. To the west, the peasantry is roused by a local noble’s mistreatment of two shepherd brothers. In the east, a lord raised from the common folk is resistant to the established way of doing things.

Some of the minority, usually-placid, Yanari resent their oppression, and the ancient Q’shari race still live in the wilds, driven from the world by human upstarts. And in the shadows, the sinister Order moves at all levels, plotting its rise to power.

But the machinations of men are not the only tremor. Demons have begun to walk the Mortal World, seeking souls to devour. In the Astral Realm, the gods themselves are unsettled; they can sense that the Lurker has returned.

Find out about the author, David Gray, below!

I write because I want a voice. I want people to think. They don’t necessarily need to think about how I do or agree with me. Still, at least they should think for themselves, rather than being told what to believe by media barons and warped, selfish politicians and billionaires. We live in a world where the nastiest people, shouting the loudest and with the most vitriol, are heard and, unbelievably, listened to! I just want to do my bit to show the other side of the coin.

I’ve always loved fantasy, particularly the dark and creeping terror of Lovecraft, which was mixed so well with epic adventure in the old Warhammer Fantasy Roleplay series (I know, geek alert!). So was born the Portal Stones series, with the first novel, Children of Gods, published in November 2019. I’m hoping it does the job of combining adventure and excitement with political intrigue and the subversive, underlying menace of gods and demons who care nothing for the lives of mere mortals in the pursuit of their desires. Indeed, it has been blog reviewed as “a must-read for any fantasy lover.”

It’s a lot of book for a good price (I believe it’s longer than the first GoT novel), but then you need the word count when there’s so much to cover! Much of the inspiration comes from real history, the brutality of which in most cases is only slightly exaggerated. The past was a rough place, and I think it’s important now, more than ever, for people to realize that the rights and freedoms they enjoy today weren’t given to us easily; they had to be taken. If we don’t stand up for them, we’ll lose them. And once they’re gone, it takes a lot of effort to get them back.

There will be six books in the series, and unlike another aforementioned series there will be an ending! It might take some time though; writing novels, this long takes a lot of effort, after all!

What else am I working on?

As well as working on the second book in the Portal Stones series, provisionally titled The Red Banner, I’ve got two books out now in the Darke Future dystopian series, set in a grim, polluted future dominated by vicious and cruel conglomerates; Ripples on Darke Water and Darke Memories. So the third book in that series is another work in progress that’s coming along.

I’ve also got a sci-fi novel on the way, although it’s on the back burner at the minute!

Embers of Memories by A.K. Rohner