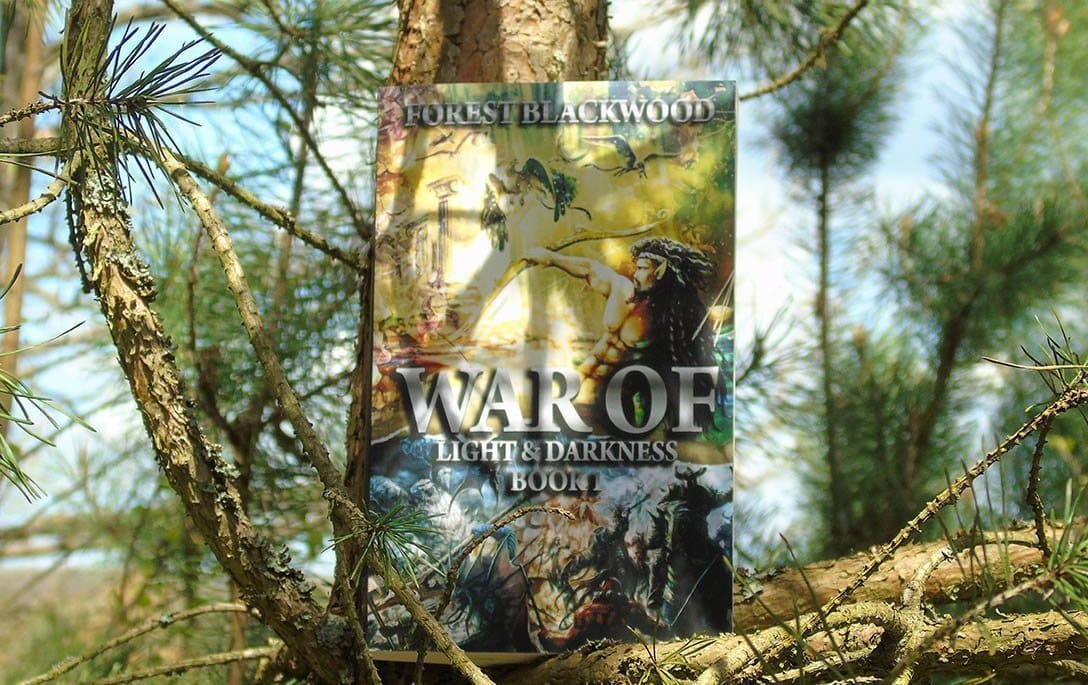 War of Light and Darkness by Forest Blackwood is here. Discover the universe composed of seven magical lands, each of which hides a unique charm. However, centuries ago, the transitions between them were closed, and their inhabitants gradually forgot about their neighbors.

One day, Count Artis of the Kingdom of Draxban discovers the ancient mechanism that allows you to move freely between lands. Along with the boon, there is a threat, because the presence of impure forces has contaminated some worlds.

They are now beginning to reveal themselves and wreak havoc. The areas remaining in isolation will soon be on the brink of war, which will determine their fate. To face the demons, witches, and vampires from the dark Lanar, people are forced not only to make an alliance between themselves but also to use the help of Angels. Neither of them, however, feels that war turmoil will wake up yet another, much more powerful force that has been dormant for centuries.

The action of the novel is located in seven magical worlds. I briefly allowed myself to present to you a description of each of them separately:

The action of the novel, the “War of the Light and Darkness,” is taking place in the extensive universe, a compound of seven magic lands. They are listened below!

This duchy of people which the Akrawan prince is ruling is. Extensive seas, thanks to which Almegia is famous for its large fleet, are surrounding them. Second, by ships unusual lions which local knights are exploiting as riding horses are an identification of this land and which are immune to every magic. Also, enchantresses who are basing their power on the magic of three materials in Almegii – of wood, rock, and iron.

The Draxban kingdom is inhabited by people and divided into a row of counties. Enchantresses, performing the role of minders are leaning magnates on individual manor houses. Also, magic lynx live in Draxban, which seen from a distance look for observing as playing children. However, this clear image constitutes only a magic stratagem, thanks to which more than one assailant was deluded and fatally surprised, when it was already too late. Chosen ones of angels to which the fate assigned the particular role for playing come from it is of this land. However, this land is being harassed with treacherous actions of witches, vampires, and minor demons.

Beautiful land inhabited by angels. It here one’s on an island amongst the greenish ocean. An Archangel has a registered office. Angels stayed in two hierarchies – of the Court and Shepherds – they are inhabiting nearby land, training in their trade, and often sending to other lands to be on the alert above the living their population. In Inarax, a hoar frost is covering the Earth what he is buying, that tops rising here from a distance look like clouds in the sky.

Gloomy rainy land from which the most powerful wizards for which they are not only feeling respect come most dangerous of demons, but even very Archangel. However, the knowledge about her existing is being held in a profound secret, and to her, only a narrow magic circle has access. To of the ones last a clandestine sect of vampires, for which the leader is good at the ancient language of wizards ranks and can establish contact with them. It is least get to know from all lands.

It is enveloped with darkness land of demons, witches, and vampires. It from here is permeating the evil to other countries, poisoning them and destroying. A constant night is ruling in this land, and the hidden sunlight is thick clouds too unnaturally. Trees and the flora are here as equally unfriendly as residents – the limbs of trees deprived of leaves, kinked are smoking and are bursting with flames. Lanar constitutes the homeland old and of the younger generation of demons, as well as smaller beings, called morwags and argous.

A land ruled by priests. Trees are here in silvery color, whereas mountains are looking like coal and have a dark blue color. Above fields, the most beautiful fragrances of flowers are rising. However also an evil made a nest in this land full of the charm. To its hiding place, it chose dark mountain caves, where the Ragrog demon settled along with his servants.

This is a beautiful land, full of forests and majestic mountain peaks, on which people build their mansions and castles. King Alwan rules it, and brave knights support it. It is from this land that winged bears come, whose skin is so thick that no weapon pierces it, and when someone tries to cast a spell on one of them, it bounces and returns to the caster, then exerting its effect on it – positive or negative. There are also ethereal wizards in Unbia who can move, turning into a whirlwind, and traverse the land like a tornado, without causing any harm to it.

Get your copy on Amazon today! You can also find more information on Forest Blackwood website!

22: The War of the Gods by Manuel Martinez and Phyllis Barash