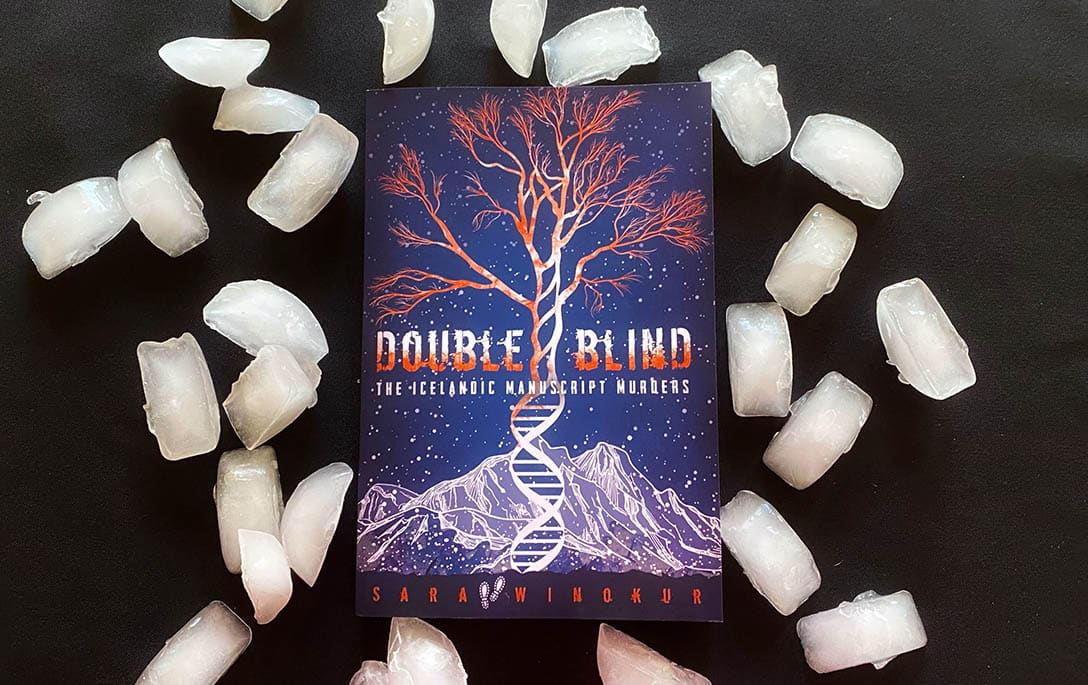 Double Blind by Sara Winokur Review is here. This novel centers around Brynja Pálsdóttir. While riding a carousel at the local fair, Brynja loses sight of her seven-year-old brother, Lukas. Little does she know she’ll never see him again. Or will she?

Twenty later, the book picks up with Brynja living her life in Iceland with her fiancé, Ari. He is the prime minister, and she is a forensic DNA scientist. Brynja works with the police using DNA research. While working, a mysterious poem within a letter arrives. It hints that her brother Lukas never died, as many believed at the time. This triggers old feelings to arise within Brynja. She blames herself for her brother’s disappearance and can’t shake off this new finding.

However, the letter isn’t just about Lukas. It is also about an Icelandic manuscript that is scheduled to be put on display for the independence celebration. Using her fiancé, Ari’s connections, Brynja gets a closer look at the manuscript, hoping to find clues about where and if her brother is somewhere out in the world. However, the person who delivers the document dies of poisoning, making Brynja a prime suspect in his murder.

Who wants to frame Brynja for murder? Will she find her brother alive? Or is all this a hoax? Was Brynja the target twenty years ago, and if so, what is this person after? You’ll have to read this novel to find out.

Overall, I enjoyed this novel. It was unique, and the mystery was captivating. I found myself holding my breath, smiling, and crying. Sara Winokur was able to use her knowledge of being a Ph.D. molecular geneticist and create a fascinating world.

The characters in the book were well developed, too, and took on a platform of their own. It was a book I’d recommend reading, even if you aren’t a crime-solving fan. This book has a way of capturing any type of reader and pulling you into the story. The ending was brilliant. I never saw it coming and loved how it all concluded. But I will say my favorite part of this book with how beautifully Winokur intertwined her knowledge of being a molecular geneticist into the book.

Author Sara Winokur is a geneticist, researcher, and author. She writes historical fiction and cultural thrillers hoping to make science accessible to readers while they’re being entertained. Sara has a master’s degree in cytogenetics and a Ph.D. in molecular genetics. Her research helped identify mutations underlying muscular dystrophy, Huntington’s disease, dwarfism, and a rare craniofacial syndrome. She continues to work as a consultant on potential therapies for genetic disease.

Sara is an avid reader of historical fiction, mystery-thrillers, and Scandinavian noir, loves to explore other cultures, and has already visited over 60 countries. In her upcoming mystery thriller Double Blind: The Icelandic Manuscript Murders, a young boy disappears from a fjord in Iceland. Twenty years later, his twin sister, a DNA scientist, searches for him and ends up in a world of trouble.

As an ovarian cancer thriver, Sara has a sense of gratitude, strength, and perspective that she extends to family, friends, work, and her writing. On her journey from science to writing, she says “Let go of who you are and become what you might be. Do what scares you.” A mother of three, she resides with her husband and writes in Southern California.

You can get a copy of Double Blind on Amazon!