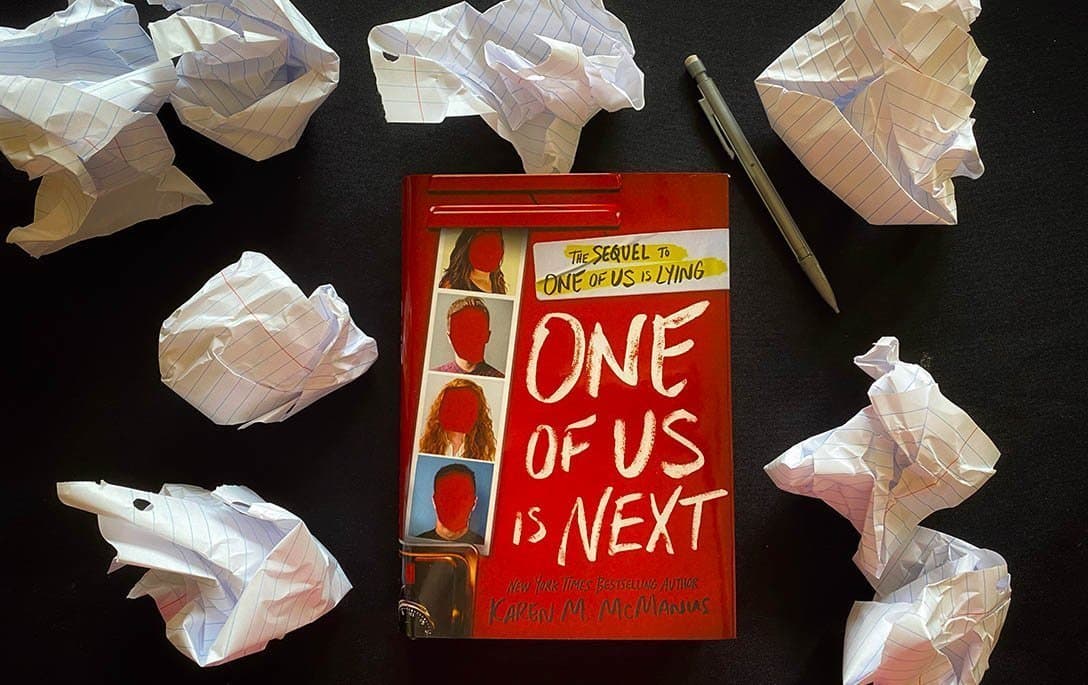 One of Us is Next by Karen M. McManus Review follows One of Us is Lying. For those that don’t know, this is the sequel and one you won’t want to miss reading.

This novel picked up a few months after One of Us is Lying ended. This story follows Bronwyn’s little sister Maeve along with her friends Knox and Phoebe. Maeve doesn’t have many friends outside her sister’s older friends: Addy, Nate, Cooper, and Luis. She spent her younger years in the hospital battling leukemia. Her one friend, Knox, is her in her grade, and if you read One of Us is Lying knows they dated briefly.

Knox is the youngest sibling in his family and the only boy. He doesn’t get encouragement from his father, which bothers him and keeps to himself at school, unlike Phoebe. It seems everyone knows Phoebe because she likes to date a lot of guys. Currently, she’s hooking up with Brandon Weber. The quarterback of the football team and Bayview’s new Cooper. However, unlike Cooper, Brandon is cocky and arrogant, loving his spot in ruling the school.

Things at Bayview take a turn when yet another copycat of the shutdown gossip app About That circulates. It comes in the form of a text message to one single person at a time, giving that person the option of picking truth or dare. First up is Phoebe, who ignores the message causing her to forfeit and truth to be revealed. It’s more of a dark secret that spirals her world out of control. Next comes Maeve, who also ignores it, causing a secret of hers to get revealed that will either strengthen or break her friendship with Knox.

Things take a turn for the worse when the game of truth or dare leads to the death of someone at Bayview. It’s the second death in a year sending the town into a downturn. Rumor has it the lastest victim got murdered. Was this game planned to kill to inflict revenge?

With Nate, Addy, Bronwyn, and Cooper pulled into another mystery, can they figure out the murderer before it’s too late? It’s another web of a story; each chapter tries to unveil through the characters. One thing to remember, though, is no one is safe.

Overall, the mystery of this book was as stumping as the first. The ending seriously dumbfounded me. It was a truly fantastic read. Was it as good as the first? I didn’t think so. I enjoyed the characters in the first and wasn’t as impressed by Maeve, Knox, or Phoebe. The ending, too, didn’t wrap things up like I wished it did. It was kind of left out in the open, and this being the final book in the series of One of Us is Lying, I was left wanting more.

I didn’t feel as connected to these characters. The driving force for me was the mention of the previous characters in this storyline. They were tied together in a brilliant way, which helped the story. I wasn’t left disappointed by the mystery at all. I was left in awe because this was indeed an ending I NEVER saw coming, but it fell off, and I wanted more. As for the characters, I wasn’t as moved by them as I was in the first book. Which novel did you like best?

Title: One of Us Is Next
Author: Karen M. McManus
Pages: 372
Where to Purchase: Amazon, Barnes and Noble, Target, Books A Million
I rate it: 4/5

The Inside Hustle by Joanna Walden