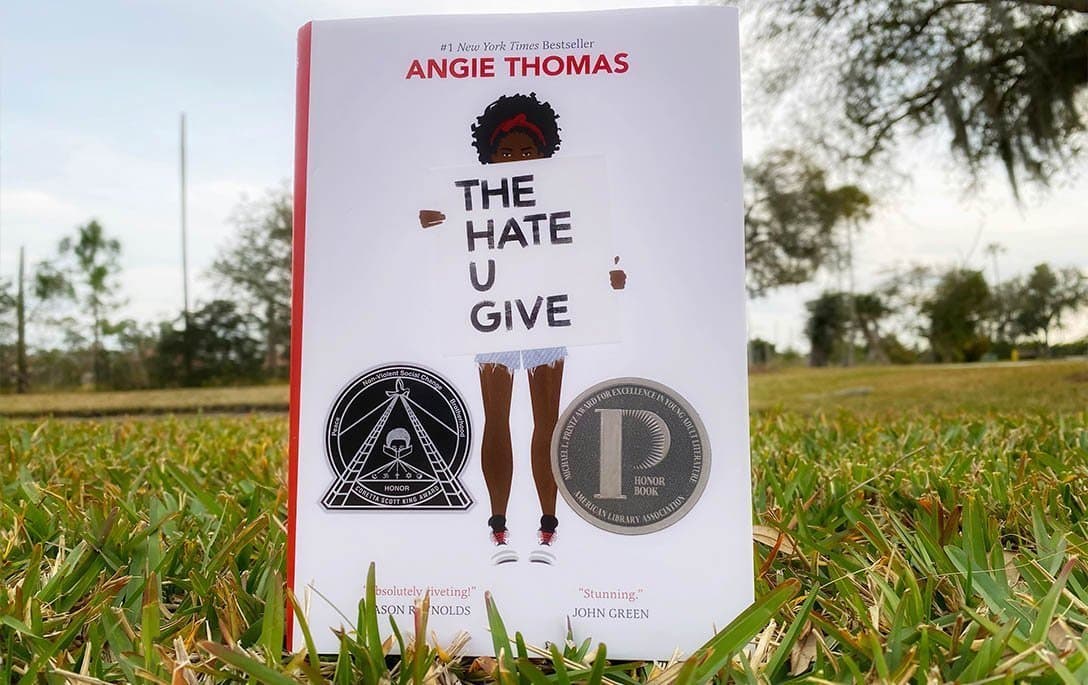 The Hate U Give by Angie Thomas Review is here, and I just have to say WOW! What a powerful, strong, dynamic book that I can’t believe I haven’t read sooner. Angie Thomas did a phenomenal job because this book isn’t about being black or white. It’s about giving a voice to those that are oppressed and casting light onto those that a certain stereotype.

The novel tells the story of sixteen-year-old Starr Carter. A black girl living in Garden Heights that many think is the ghetto. Starr’s dad, Maverick, is an ex-con who chose to turn his life around after his three-year sentence was finished. Her mother, Lisa, is a nurse that works at a local clinic. She also has an older brother Seven who is related to her by her dad and a younger brother Sekani.

Starr’s dad is loyal to her neighbor which is why they reside there but to curve his kids on the right path. They attend the white privileged private school called Williamson Prep. Starr keeps the two lives separate, opting to be the cool black girl there by wearing Jordan’s and not speak ‘to ghetto.’ Even Starr’s ‘white’ boyfriend, Chris, is kept a secret…well, everyone knows but her dad.

While on spring break, Starr goes with her friend, Kenya, from Garden Heights to Big D’s spring break party. In the middle of it, a shooting happens, and Starr leaves with Khalil. Her best friend from childhood. On the way to Starr’s house, they get pulled over. Though they are not speeding, the cop says he pulled Khalil over due to a broken taillight. When Khalil disagrees, he is forced out of the car and told not to move. But Khalil leans into the car, grabbing his hairbrush to ask Starr if she is okay. Before he can even finish the cop shoots him three times, killing him.

This traumatizes Starr, and she chooses not to speak out to anyone. She can’t get over seeing her best friend die, especially when she saw Natasha, her other best friend get murdered in front of her years before. Her Uncle Carlos is a detective and works with the cop that shot Khalil and encourages Starr to tell her side of the story in confidence to the department. Starr agrees and delivers her side, but soon discovers they are trying to paint her friend as a drug dealer and nothing more.

Soon, Starr worlds collide, and she has a choice to make. Stay silent or use the most powerful weapon…her voice. Will she decide too? Even if that means her friends Hailey and Maya, her best friends from Williamson, don’t like her anymore? And what if Chris can’t handle both versions of Starr? It’s tough decision Starr has ask herself. Regardless, nothing can prepare Starr for the fight set out in front of her.

This novel was a huge surprise. In short, I loved it. The power Angie Thomas conveyed through the words of her characters makes you sit back and say WOW. She not only knew her characters. Angie knew their power. It’s a storyline you don’t see very often, and she did a great job highlighting the police and the residents. It wasn’t that the Carter’s hated the police. They just wanted change and to be heard. They wanted the stereotyping to stop. It’s a powerful message.

I especially loved the title of the hate you give, which means thug. It was very clever and suited the story. Overall, I definitely recommend this book. It’s so good. The book is easy to read. I did watch the movie and thought the cast was terrific. However, I still think the book is better than the movie. The story I felt like was stronger in the novel.

Have you read this book OR seen the movie? What were your thoughts? Comment below and let me know!

Title: The Hate U Give
Author: Angie Thomas
Pages: 444
Where to Purchase: Amazon, Barnes and Noble, Target, Books A Million
I rate it: 5/5