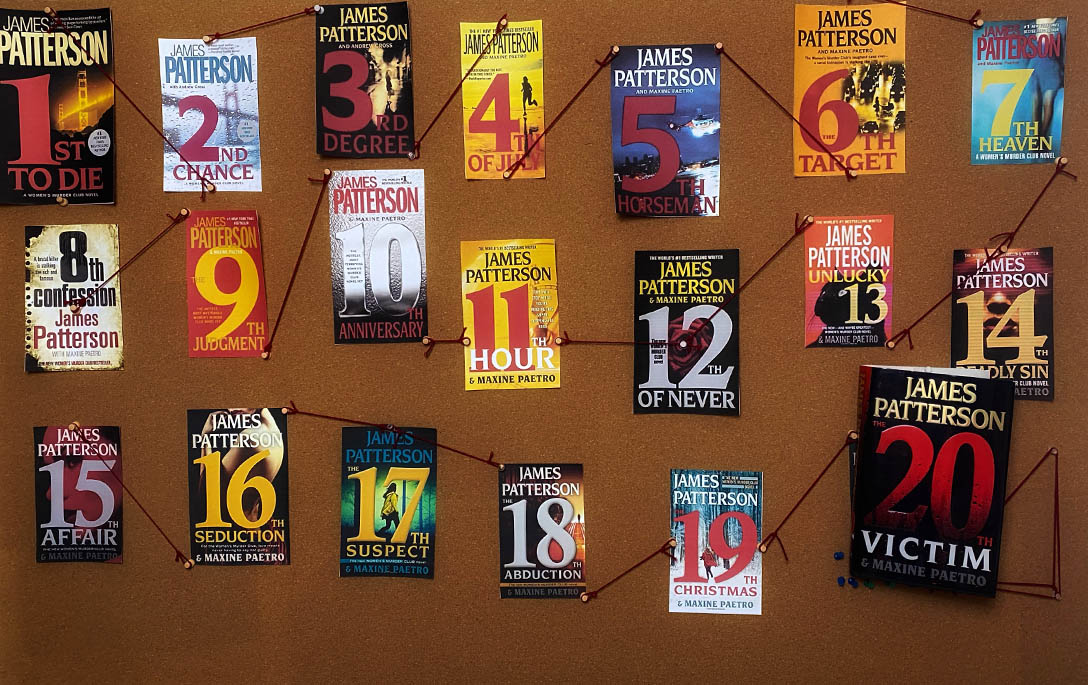 The 20th Victim by James Patterson Review is here. I have to say THIS BOOK is my favorite Patterson novel to date!

This book brings back all the beloved characters of the Women’s Murder Club novels before it: Lindsay, Cindy, Claire, and Yuki. We start with Cindy Thomas reporting on a crime that took place in the parking lot of Taco King. The victim happened to be a famous professional player in the sports world and was shot in the head while sitting in his car with his pregnant wife. What is most shocking is the message written on the back window: Rehearsal.

We then go to Yuki Castellano, the assistant district attorney who is prosecuting Clay Warren. A barely eighteen-year-old boy who is being charged with the murder of a cop, grand theft auto, drug possession, and other crimes. Yuki knows he didn’t do it, but the person who did got away and Clay Warren won’t talk, tying Yuki’s hands.

Meanwhile, Lindsay Boxer and her husband Joe Molinari are on a second honeymoon to Napa, where Joe introduces her to David Channing. His teammate in college who got paralyzed in a car accident. If only their trip was as simple as a honeymoon.

Not two days after returning, there is a string of murders from snipers targeting victims involved in the drug trade. Lindsay is slammed with the case alongside her partner, Rich Conklin. But it is the news she gets from Claire Washburn that really shakes Lindsay to the core. What news could possibly shake the bulldog Boxer?

The real question is, can Lindsay focus enough to find out who is targeting people of various social classes all involved in drug running before it’s too late? One thing becomes clear. The police are outnumbered when it comes to bringing in the person responsible for these killings. But how can one man or woman be behind massive killing sprees taking place in different major cities all at the same time? This is something the Women’s Murder Club will have to the bottom of before the book ends.

Joe is also on his own murder solving crime mystery. His friend David thinks a local doctor murdered someone close to him. It seems like no coincidence. There have many deaths under the doctor. Will Joe think David is letting grief talk, and his father did die due to complications of not taking his medications? Or is the local doctor a murderer?

In between, we get to see their personal lives and professional lives play out. But what I was most anxious to find out about and didn’t until the very end is if the tiff between Lindsay and Cindy end with forgiveness?

In my opinion, this is the BEST Women’s Club Murder novel in the series! It was fun, engaging, had me constantly guessing and turning the pages! I LOVE these characters, and this book did great justice to them. I loved seeing them in their personal lives as well as at work. In between it all, we are busy trying to figure out who’s responsible for the crimes throughout the novel.

My favorite character in this book was Lindsay. I love her and Joe together as well as their daughter, Julie. How she is so fearless on the job while having a fairytale life with Joe is genuinely heartwarming in this story. Who was your favorite character? Did you like this story?

Title: The 20th Victim
Author: James Patterson and Maxine Paetro
Pages: 398
Where to Purchase: Amazon, Barnes and Noble, Target, Books A Million
I rate it: 5/5