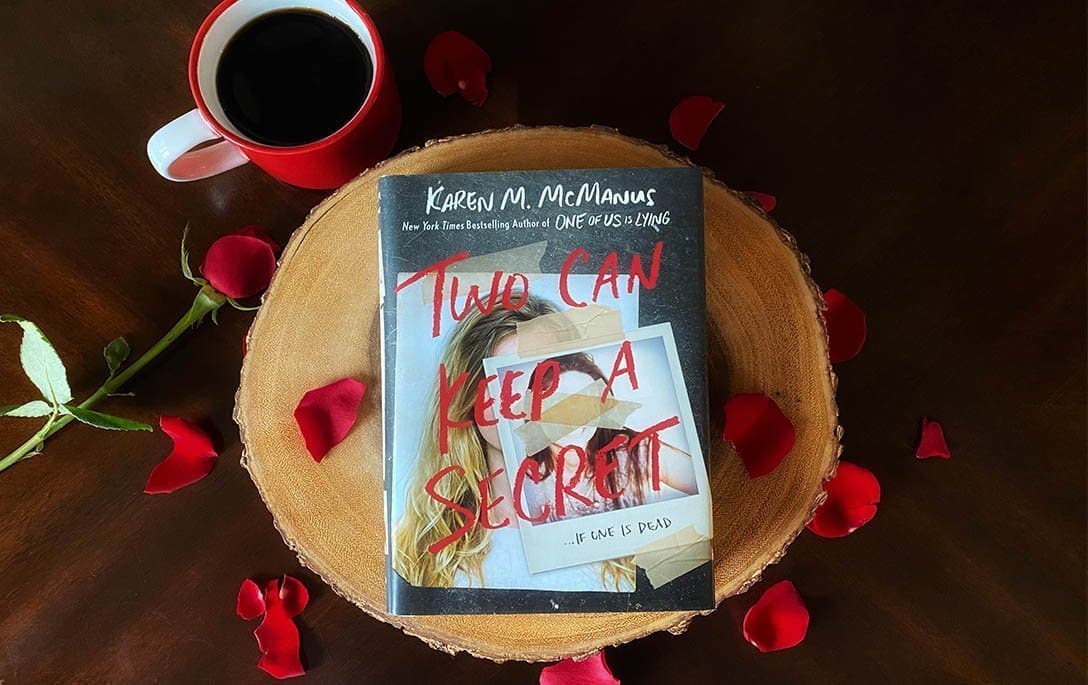 Two Can Keep A Secret by Karen M. McManus Review is finally here! Echo Ridge is a town filled with mystery and murder. This novel is from the point of view of Ellery Corcoran and Malcolm Kelly. Ellery and her twin brother Ezra move to Echo Ridge to live with their estranged grandmother after their mother, Sadie, is forced to enter rehab. All the twins know about Echo Ridge is their Aunt, Sarah, went missing here years ago. Their mother’s twin, who she refuses to talk about, and another girl Lacey did five years ago. Her body was found in Murderland. A quivering, haunting backstory for a town they are town made to live in.

On the way to their new home, they come across the bloodied body of Jason Bowman. A local teacher who was the victim of a hit and run. This was definitely not the way Ellery or Ezra wanted to arrive in this foreboding town. Ellery, who’s obsessed with crime-solving novels, gets more focused on the past murders in the town when the new Homecoming Court gets targeted with threats. But is the same killer out to murder the next Homecoming Queen, or is it a copycat? That’s the question on everyone’s mind. Many people suspect Declan Kelly. The boyfriend of the late Lacey Kilduff. However, no evidence ever proved he committed the murder. Still, no one ever gets past their suspicions.

Ellery wants answers mainly because her family grew up with a dark cloud over them due to her missing Aunt. Yet, as Homecoming draws closer, no one at Echo Ridge High or the students are safe. It gets even worse when Murderland, now renamed Fright Farm, reopens, and the popular girl Brooke goes missing. Is she another victim? Will the other popular girls Katrin and Viv be next? Ellery gets shaken to the core when the twists in this novel reveal hidden secrets she isn’t sure she wants to know. The only good thing is Malcolm Kelly, who Ellery can’t help but think about.

Malcolm feels the same way. When the book shifts to his point of view we get to feel how he deals with having a brother, Declan, being considered a murder suspect. He isn’t close to his brother. Declan always had his own thing in football going on when he was growing up. Then Declan left town to escape the suspicion of a murder he says he didn’t commit. Malcolm’s best friends with Mia, whose older sister Daisy went to school with Declan. Ellery makes it known she thinks Daisy had a thing for Declan. Is it possible Lacey died in a fit of jealously during an argument with her friend? After all, she was choked to death, meaning she knew her killer. Malcolm can’t fathom his brother would do that, but when he doubts Declan. Can he ever take back his hurtful accusations?

Fright Farm in Echo Ridge is hardly the only place that holds secrets. It seems all the residents are surrounded by them, while a killer lurks among them…

This novel was a homerun! I LOVED LOVED LOVED this book. It was absolutely stunning and flawlessly written. I never saw the twists and turns coming. I had to keep reading to find out what happened, and the ending was EPIC. I swear, this was seriously one of the best books I’ve read this year. Karen M. McManus is my new favorite author. It was my third book to read by her, and I can’t wait to read her other books.

The way she took a simple story and created so much drama with realistic twists was amazing. If you’re a fan of A Good Girl’s Guide to Murder, this book is for you. Not only will you fall in love with the story, you’ll fall in love with the characters. They were well rounded and so much fun. My favorite character was Ezra. He was cool, protective, and knew himself. Ezra won’t apologize for who he is, which I LOVE.

Title: Two Can Keep A Secret
Author: Karen M. McManus
Pages: 323
Where to Purchase: Amazon, Barnes and Noble, Target, Books A Million
I rate it: 5/5