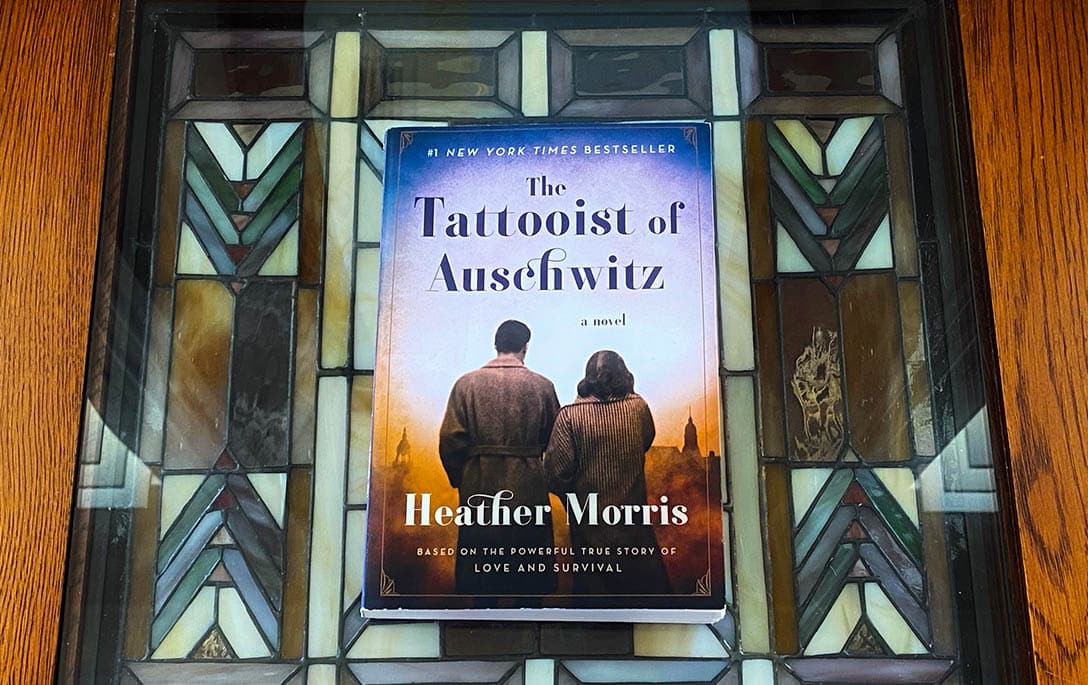 The Tattooist of Auschwitz by Heather Morris Review is here. This novel is based on actual events and truly is a powerful story that needed to be told.

April 1942 is when this novel begins and centers around Ludwig Eisenberg, better known as Lale. He is a Jew who gets forcibly transported to the concentration camp at Auschwitz-Birkenau. There he soon learns to keep his head down and mouth shut if he’s going to survive. Lale discovers the camp is an actual slaughter ground and not work camp as he was told. Soon after arriving, Lale gets sick with typhus but is nursed to health by his fellow Jewish bunkmates.

Pepan, the camp tattooist, takes an interest in Lale because he sees that people are willing to die to save him. He offers Lale a job as his assistant in tattooing the newcomers at the camp. Lale hesitates to be apart of defiling the skin of fellow people but agrees because he can get extra rations to pass on to his former bunkmates in Block 7. After adjusting to tattooing, a group of young women are escorted in. It is then Lale sees Gita for the first time. All it takes is a glance for Lale to be swept up in her eyes.

Lale takes a chance and writes to Gita. His guard Barestski offers to deliver it. A task Lale takes him up on even though he could be killed if it gets discovered. The risk is worth taking as Lale falls in love with Gita. They spend Sundays together when they can and steal glances, careful not to alert the SS guards of their courtship. With Lale holding a coveted position as a tattooist within the camp, he isn’t watched as closely. He, therefore, forms a friendship with Victor and his son, who live in town. They are brought into camp to build the crematoriums.

In exchange for diamonds and dollars, Lale gets sausages and chocolates from Victor that he passes out to people around the camp in need of extra food. Soon Lale finds a rhythm to his days. He works hours on end but steals time with Gita while playing with the Gypsies who live in his block. However, when the SS discover Lale’s secret stash of money and jewelry, he gets taken away. Lale is sent to the area where they beat people to death. However, the guy charged with his death, Jakub, is someone Lale helped with food before. But will Jakub return the favor and spare Lale’s life?

Even if he does survive, with the camp broken up and the girls marched off during the night, will it matter to live if Lale loses Gita? Is there such a thing where love cannot break even during the worst of times? Read the novel and find out.

Overall, I have to say…wow. This book is powerful. I have no other words to say. It is based on Lale’s account of the war. It is so heartbreaking; it terrifies me of the things that happened during that time and what people had to withstand. Morris depicted the heartbreak, the courage, and the hope Lale felt in such a beautiful way.

I’ve read that the events are accurate and that some things didn’t happen, but this was based on Lale’s account and how he remembers it. I think it was translated perfectly and was done impeccably well. It was a book that changed my perspective and made me think of other things. The gut-wrenching heartache mixed with hope for love is something that no other book I’ve has captured. Have you read this novel?

Title: The Tattooist of Auschwitz
Author: Heather Morris
Pages: 262
Where to Purchase: Amazon, Barnes and Noble, Target, Books A Million
I rate it: 5/5