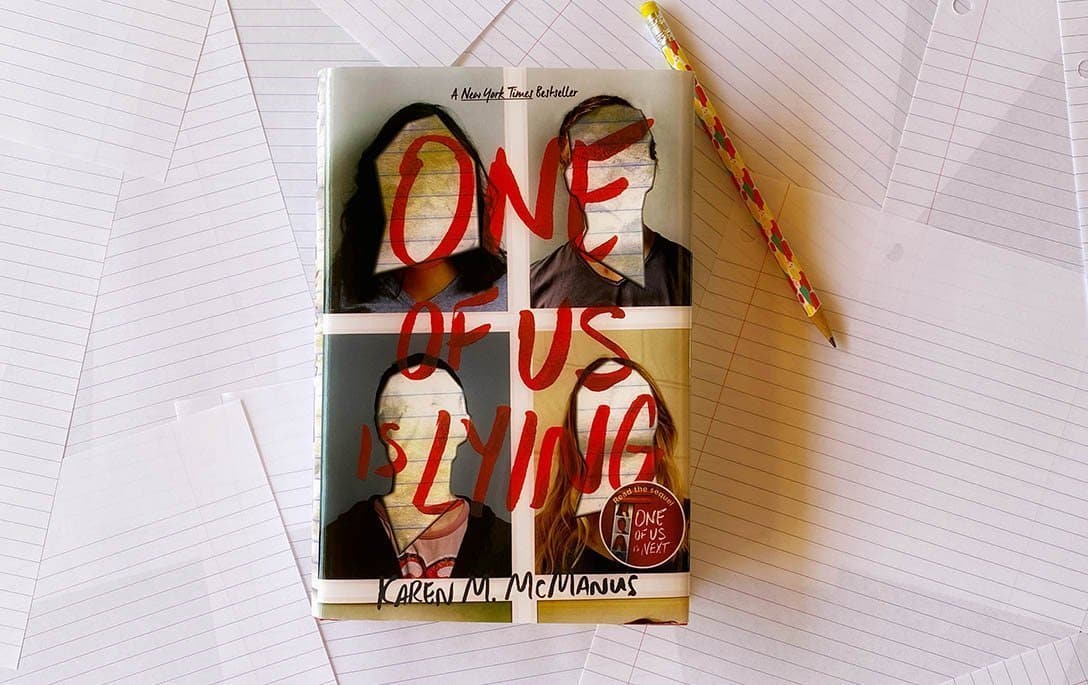 One of Us is Lying by Karen M. McManus review is finally here, and this book was one I seriously couldn’t read fast enough. It centers around Bayview High students: Bronwyn, Addy, Nate, and Cooper. Bronwyn is the smartest girl in the class. Addy is the most popular and most beautiful. Nate is the rebel, and Cooper is the star baseball athlete. All four couldn’t be more different but are tied together tighter than they realize when they enter detention with Mr. Avery and fellow student Simon.

While in detention, Simon dies from an allergic reaction to peanut oil. The problem? Someone had to put it in his drink for him to ingest that much, and all the epi-pens were conveniently missing, leaving the four student prime suspects in his murder. After all, no one else could have given it to him. The police focus closer on them when mysterious posts on Simon’s gossip app, About That reveal the secrets each student had something to lose if Simon posted it. A strong motive, right? Each secret revealed would’ve destroyed not only their standing in school but their future.

The four students band together. None convinced one person isn’t lying. However, two people that become closer than anyone are Bronwyn and Nate. The circumstances bring out their past crushes on each other, but Nate’s hesitation to act on it due to his past might stop him from having a stable future. Bronwyn tries to convince Nate otherwise, but will he listen? Or will whoever killed Simon stop it before it can start? One thing everyone must remember is no one is safe. The secrets they tried so hard to hide come to light and life as they knew it gets destroyed.

Bronwyn is no longer able to be the perfect straight-A student she tried so hard to be. Her parents don’t look at her the same, and she must confess that her struggle to be perfect has everything to due with her younger sister, Maeve’s illness. Meanwhile, Addy must come to terms with not being popular. Will she finally stand on her own two feet or do everything she can to remain popular? Nate doesn’t care about anything or anyone, but what happens if he lets himself? Finally, Cooper’s secret nearly destroys his relationship with his father. Will his truth set him free?

It’s a tangled web they must undo while evading the threat of a killer. At the end of the day, they must ask themselves why someone is targeting them and no one else.

I have to say I LOVE THIS BOOK. Let me say that again. I LOVE THIS BOOK. It is seriously amazing, and I could read it a hundred times and not get sick of it. This story is indeed a blessing to the YA genre. At first, I thought maybe there were too many characters to follow, but nope. I love how well rounded each of these characters is in the story. They are so unique with different stories and feelings that I wish they were actual people I could be friends with…yes, I said that. My favorite character is hands down Cooper. I love him. His entire story and character arc really drew me in. I’m a Copper fan now if only I can see him play baseball…

This is definitely a book you need to read I can see why it’s been on the NYT best-seller list for over a 100+ weeks. The mystery was stumping. I never saw that ending coming, and I couldn’t put it down until I finished it! Have you read it yet? Who was your favorite character?

Title: One of Us is Lying
Author: Karen M. Manus
Pages: 362
Where to Purchase: Amazon, Barnes and Noble, Target, Books A Million
I rate it: 5/5