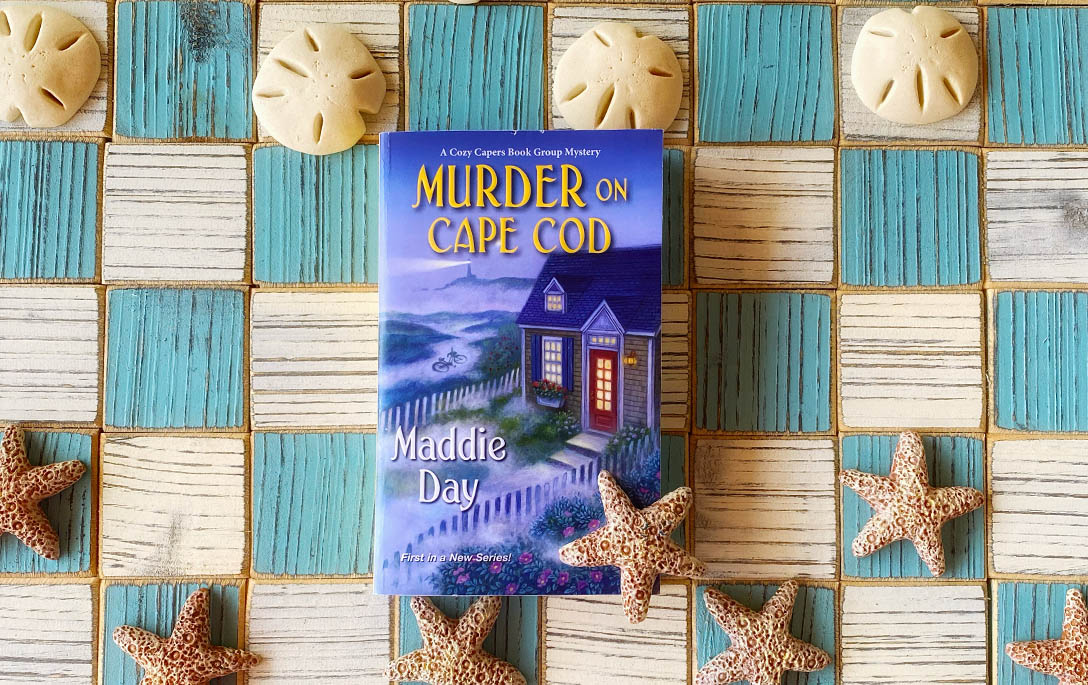 Murder on Cape Cod by Maddie Day Review is here. This cozy mystery is the first in the series and centers around Mackenzie “Mac” Almeida. She owns the local bicycle shop in Cape Cod called Mac’s Bikes, where business is good. Her boyfriend Tim owns the local bakery, and she lives in a tiny home right by her shop with her parrot Belle. Life is simple for Mac, and she loves it, especially her nights spent in her book club called Cozy Caper.

After leaving a meeting with the rest of the Cozy Capers, Mac literally runs into the dead body of Jake Lacey. A local guy who eats at the local food bank and struggles to get by. When the police arrive along with Chief Victoria Laitnen, Mac’s life spirals. Jake didn’t just die. Mac sees he got murdered with her brother, Derrick’s unique knife.

It becomes decided that the Cozy Capers are going to do their own investigation. A task Detective Haskins suggests not to do. But nothing can deter the group from coming up with their own theories. The reality of solving a murder is so much more fun than reading about it! However, that soon leads everyone looking over their shoulder to see who a potential suspect could be. Gin Malloy, the owner of Salty Taffy, and Mac’s walking buddy never fails to list her suggestions. Could it be a woman visiting town named Katherine Deloit or Wesley Farnham? A wealthy guy visiting the area or a woman named Wendy. Jake did mention he didn’t need ‘money’ anytime soon. What was Jake Lacey really involved in his private life?

The one person, the police suspect, is Derrick, who has gone MIA. Could Mac’s brother really be a killer? Mac doesn’t think so, but with him refusing to talk to anyone, Mac knows things aren’t looking good for him. Mac tries to catch her brother first, but her business is busier than ever, and with Orlean. Her one employee is also acting strangely, and Mac can barely keep her head above water. Could Orlean be a suspect?

Mac questions it along with Edwin. A new guy in town, her father, hired at his church. However, the digging for answers and suspecting of people catches up to Mac when she is out in town. She almost gets run over by a motorcycle! What makes it worse is she is now getting messages from the killer. Mac can’t shake the feeling that her once sleepy town she always felt safe in, currently holds a dark shadow. There is a murderer in the town, and Mac can’t rest until that person gets found, especially since her brother is considered a suspect.

Derrick’s reasoning for disappearing adds an even bigger twist to this mystery. Will Mac be able to solve who the killer is before it’s too late? Or will the killer get to her first?

This cozy mystery by Maddie Day is the first in the series and what an opener! It was a fun read. The mystery was great, but at times I did feel like the story slowed with all the descriptions. It followed her days a little too closely, and I think that dragged the mystery. One thing I did LOVE was the unique details of Mac having a parrot and living in a tiny house. As far as romance, there wasn’t an intense romance in the novel. Did it deter the story? A little only because I’m a romance fan when it comes to books.

Overall, I recommend reading this novel. It’s an easy read, and something different to add to your reading list. I had fun reading twists and turns! I never saw Derrick’s secret coming! Have you read this novel?

Title: Murder on Cape Cod
Author: Maddie Day
Pages: 302
Where to Purchase: Amazon, Barnes and Noble, Target, Books A Million
I rate it: 3.5/5