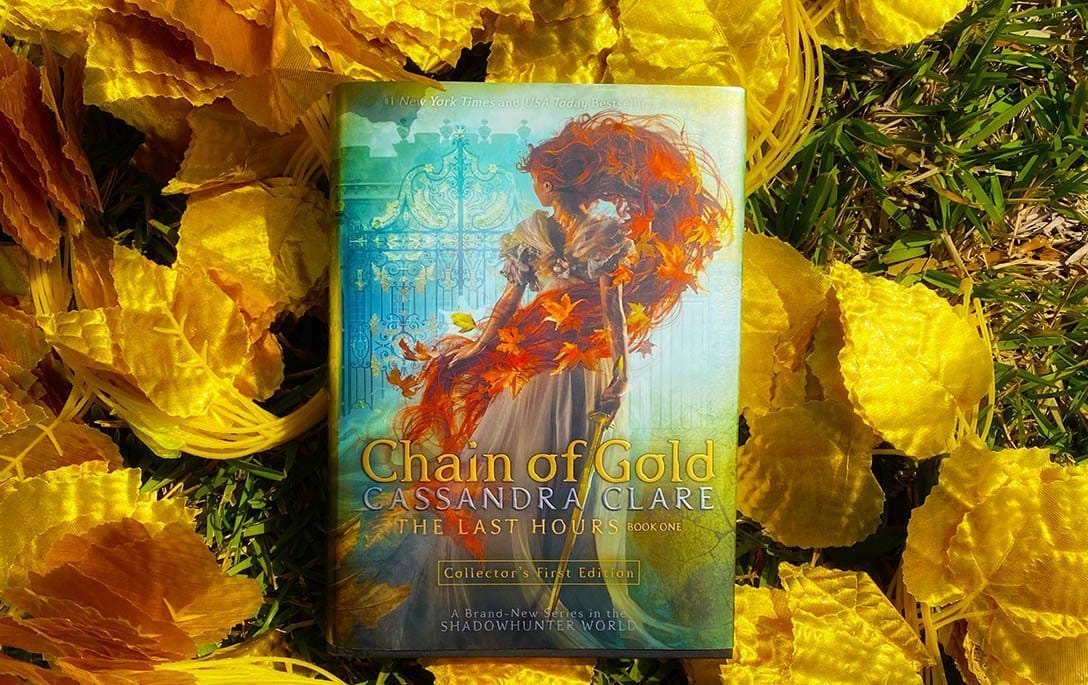 Chain of Gold by Cassandra Clare Review is here and bringing back the most beloved Shadowhunter characters EVER! This novel centers around various characters. However, the main protagonist is Cordelia Carstairs. Cordelia moves to London with her mother and older brother, Alastair. Her mother wants Cordelia to get out in London society and find a nice husband due to her father being in jail. Cordelia, though, only wants one guy, and that’s James Herondale, brother of her future parabatai, Lucie. The problem is James has an understanding with Grace Blackthorn.

This causes Cordelia to bottle up her feelings towards James, and dive headfirst into the Shadowhunter world with Cortana. Her sword. Demon attacks start up again, in broad daylight hurting many Shadowhunters. This string of attacks brings the Merry Thieves: James, Matthew Fairchild (James’s parabatai), Christopher, and Thomas along with Lucie and Cordelia on a rollercoaster ride. They take it upon themselves to figure out the powerful demon behind these attacks and create an antidote to save those who are infected.

Throughout their journey, we get a look into Lucie. She can see and direct ghosts. She sees Jesse. Grace’s dead brother, who Lucie finds herself thinking about often. We then get a glimpse into Thomas, who may or may not feel something for Alastair. Thomas just can’t seem to forget the time they spent in Paris. We then flash to Matthew, who has more demons in his closet than any character in this novel (in my opinion). He turns to the bottle to cope with a dark secret he keeps locked away from everyone, including James. The problem is when he feels something for a girl, will he let himself have her? Or will Matthew keep his feelings locked away? It’s a question only you will get if you read this novel!

In between the younger generation of characters, we get a glimpse back into Will and Tessa. There is even a special Fairy Tale of London featuring them at the end of the novel.

The biggest twist in Chains of Gold is, will Cordelia be able to forge her own path, or will she end up in a loveless marriage to appease society? Nothing turns out the way anyone thought when James’s Grandfather, the Prince of Hell, arises from hell bringing forth wrath no one may be able to fight. It’s an epic battle that will leave you wanting BOOK 2 like yesterday! The aftershock of the fight brings forth a conclusion I never saw coming.

Overall, I have to say READ THIS BOOK! Yes, it’s 582 pages, and you will need a few days off if you binge read this, but it’s worth it. The story is so unique and only something Cassandra Claire could craft. With intertwining stories and unique backgrounds of characters, this is a homerun novel. The best part is Magnus Bane makes an EPIC appearance! My favorite scene in this novel took place in The Whispering Room when Cordelia danced. If you haven’t read this novel, then I won’t give anything else away. BUT it was amazing! It displayed a change in all the characters which I loved.

I got a lot of messages on Goodreads about if I thought this novel was too long? In a way, yes, I did think it was very long and should have been two books. HOWEVER, Cassandra Claire has mastered the ability to craft a 500+ page book beautifully and make you never want to put it down. So, if you are looking for a novel that is long to try and read, Chain of Gold is one you’ll have no problem getting through it.

As far as couples in this novel, yes, I loved Cordelia and James, but I also really liked the idea of Cordelia with another character. IF you read this book, you’ll know exactly who I’m referencing. Have you read this novel?

Title: Chain of Gold
Author: Cassandra Clare
Pages: 582
Where to Purchase: Amazon, Barnes and Noble, Target, Books A Million
I rate it: 5/5

The Lane Betrayal by John Heldt