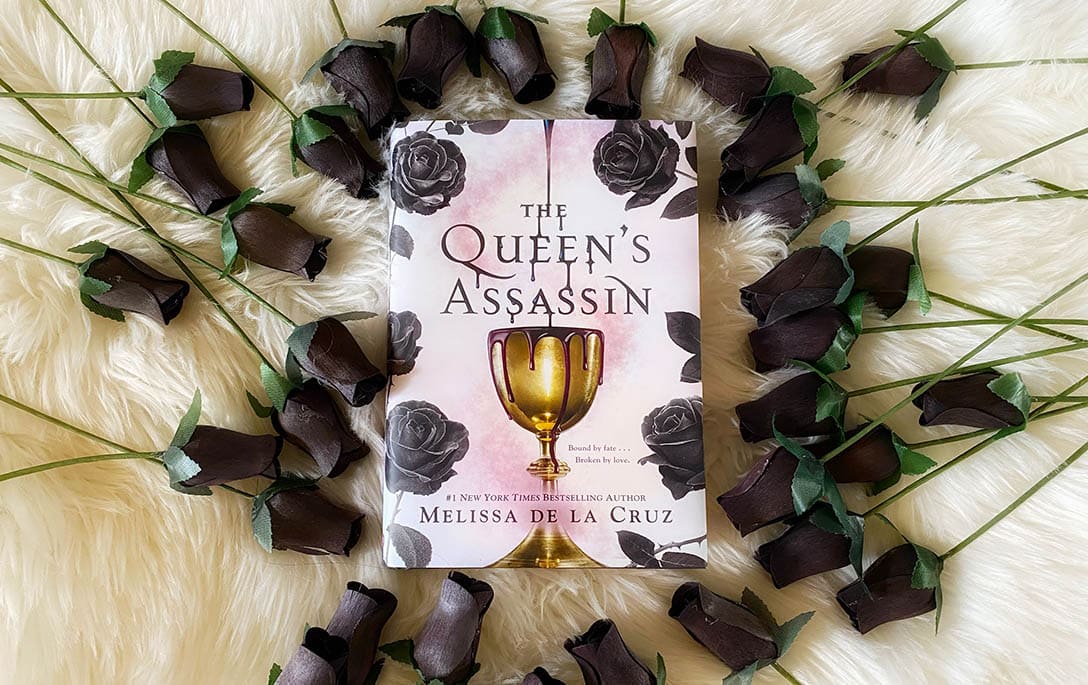 The Queen’s Assassin by Melissa De La Cruz review is here. In the first of this duology novel, we meet Caledon Holt and Princess Lilac, whose nickname is Shadow. Caledon is the Kingdom of Renovia’s deadliest weapon, better known as the Queen’s assassin. No matter who Queen Lilianna says is a risk to the throne, Caledon must carry out her tasks by ending whoever’s life she orders. It becomes something Caledon cannot deny as his bloodline is tied to a blood oath to the Queen thanks to his father, Cordyn—the former King Esban’s best friend. To get the Queen out of mourning, Cordyn agreed to find the Deian Scrolls which contain immense information on magic. A task he fails to fulfill before his death, causing his son, Caledon, to face a fate he never wanted.

Princess Lilac, who was raised in Honey Glade by two Aunts that are former Guild assassins, goes by the name Shadow with them. She was raised and hidden in the country, only sent to Court to stand by her mother when needed to keep her safe from Aphrasian attacks. Aphrasian’s want to overthrow the Kingdom and takeover to rule using magic as their weapon instead of giving it to the people.

With Caledon determined to find the scrolls to set him free from his blood oath, and Shadow wanting nothing more than to escape a life in court. Their paths cross, and soon Cal and Shadow are cast on a journey they never knew they needed. Together, they challenge each other in ways they never knew someone could. Neither of them saw themselves falling in love, but the inevitable happens between them. But what if love isn’t enough to stay together? What if the ultimate espionage is to entangle themselves with another? Will either of them choose to do so?

The biggest twist of all is when the person who is trying to assassinate the Princess is revealed. Was someone untouchable behind it all? It is a question only the next book can answer. But I will say that the ultimate sacrifice is paid in the end to save one of the main character’s life, and it broke my heart!

Overall, I thought this novel was an easy read. The story was gripping enough to keep you wanting to move onto the next chapters. However, I felt the ending was a little rushed. I wanted to soak in the one scene I waited the entire book for a bit longer. It was only a page at most, and I wanted to see more of that. Aside from that, I thought the fantasy world-building was easy to follow. The names were hard to remember, though, but they each were distinct enough that when I read it like ‘Aphrasians,’ I remembered they were the rebels.

In a way, I thought the book could’ve focused on the rebels more, but I guess that will come with the next book.  There was some good dialogue to set apart Shadow from other protagonists, however, I wish her voice would’ve continued through the entire novel. Her character arc was strong. She starts off her journey just wanting to rebel against her mother, but in the end, her bold decision proves she’s learning how not to just be a princess, but a spy in the Guild. It’s something she always wanted and something we see her take charge of in her own way.

Caledon was a strong love interest. I would’ve liked to see more of a personality from him. But overall, he fulfilled the strong ‘Queen’s assassin character’ well. I would recommend reading this novel, especially if you like the kingdom dynamic. Cruz captured this story in a unique way, unlike other king and queen novels, making her female protagonist very strong!