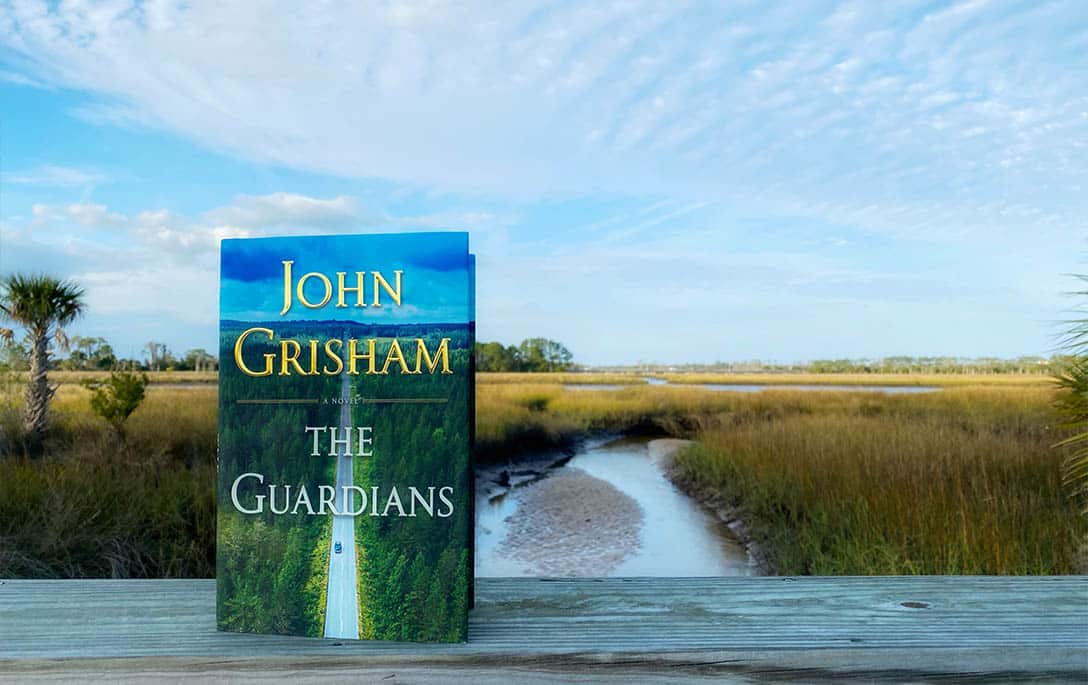 The Guardians by John Grisham review is here, and I have to say WOW! Grisham did a phenomenal job on this crime-solving novel. The story follows Cullen Post. A lawyer, priest, and now ‘innocence lawyer.’ He works for the nonprofit Guardian Ministry based in Savannah, Georgia, dedicated to exonerating those in prison who have been wrongfully convicted of their crimes. The nonprofit is run by Vicki Gourley. Mazy Ruffin also works there as well as a newly freed inmate Francois Tatum, who Post got out of prison after serving fourteen years for a murder he didn’t commit. Together they are the Guardians.

The main case this novel center’s around is Quincy Miller. He’s been in prison for over twenty years serving for the murder of Kevin Russo. A prominent lawyer in the small town of Seabrook, Florida. Russo ran a firm with his wife, Diana. At the time, witnesses confirmed Quincy was at the scene and confessed in prison to the crime. It seemed like an open and shut case, mainly since a flashlight with blood on it was found in Quincy’s trunk. A discovery that later got lost in a fire, but not before photos were shown of it to the jury.

Now, twenty-plus years later, Post decides to take the case even though he knows it will be dangerous. It becomes clear that this isn’t as simple—prove he’s not guilty case—as it involves a drug cover-up. No one related to the case wants it reopened. It only further demonstrates to Post this was a false conviction based on lies. For months, nothing new turns up because no one wants to talk. Quincy x-wife refuses to debunk her claim that Quincy owned a gun and loved hunting, while the jailhouse snitch Zeke Huffey won’t deny he was paid off to lie about his statements. It gets worse when Carrie Holland Pruitt, the person who claims to have seen Quincy flee the scene and a known drug addict at the time, won’t deny her false claim either.

With Franois’s help, Post digs deeper getting in touch with Tyler Townsend. The lawyer who represented Quincy, and the one person at the time who wasn’t afraid to say Quincy was innocent. However, dark secrets lurk in Tyler’s closet that causes him to stay as far away from the case as possible. He has good reason too when he admits to Post what happened twenty plus years ago. It’s a secret Tyler carries alone that haunts him every day of his life…

Will Post be willing to put his life at risk to exonerate Quincy? It’s a question he must ask himself as the case gets more and more dangerous. But what he never thought about was Quincy’s safety. It’s no secret if he was dead that this would all be put to rest. Will the cartel get to Quincy and end all this once and for all? Or will Post and the Guardians prevail? It’s a question you’ll have to read the story to find out.

Overall, I really enjoyed this book. It was a fresh take on a crime-solving, and I loved it. The twists and turns were beautifully written. I never saw half of them coming. The characters were relatable, and you could tell Grisham knew them really well from their reactions to their dialogue. Something else I really liked about this novel is it is based on an actual nonprofit known as Centurion Ministries, who are committed to getting those wrongfully convicted out of prison. To date, sixty-three men and women have gotten out of jail, thanks to Centurion.

The Guardians bring to light not only the work they do but also what people have to go through that are wrongfully convicted due to false testimonies, false experts, and, most importantly, false authority. It’s a gut-wrenching story to see what Quincy and others go through in prison, but it also shows the power of forgiveness. Definitely, grab your copy of this novel. It’s worth it!

Have you read this novel? Want to get your book feature? Contact me!

Title: The Guardians
Author: John Grishman
Pages: 370
Where to Purchase: Amazon, Barnes and Noble, Target, Books A Million
I rate it: 5/5