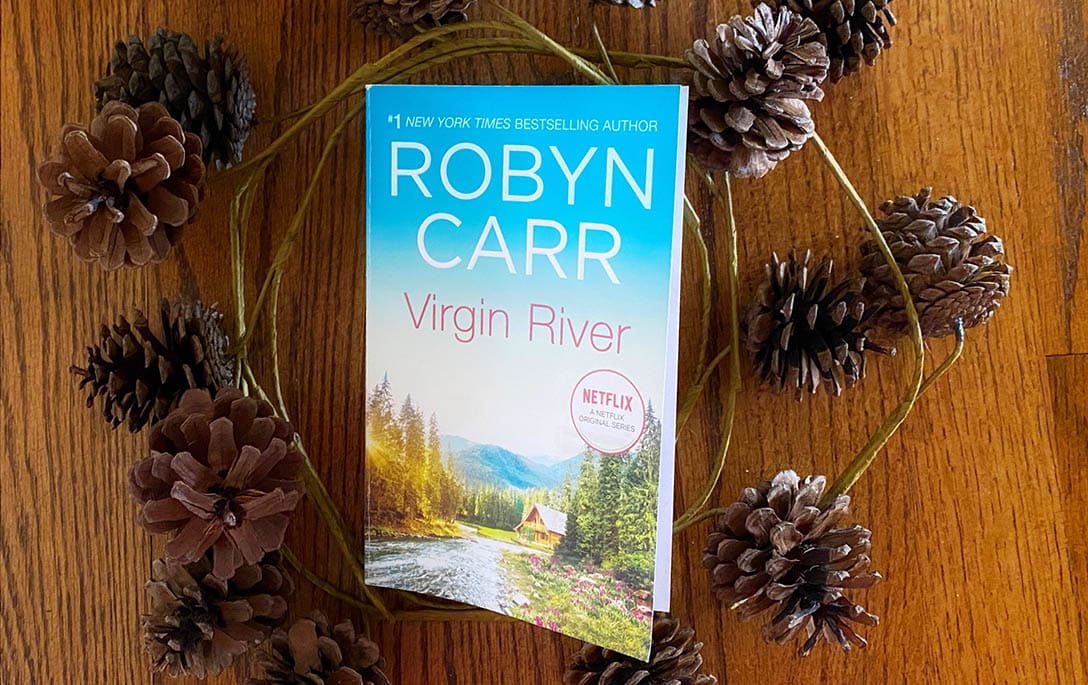 Virgin River by Robin Carr Review is here! Recently widowed Melinda Monroe thinks answering an ad for a nurse practitioner/midwife in the small town of Virgin River with a population of 600 will be just the place for her to start over. But what if starting over isn’t as easy as she thought? From the big city of Los Angeles, Melinda drives into the mountain town in a trendy bright red BMW and wearing designer attire no one has heard of. Instantly, Melinda questions her rash decision, especially when there’s a bird nest in the oven of her new cabin home! It’s hardly charming and leads Mel to the local bar where she meets Jack.

Jack is forty, single, and everyone’s dream guy in the town, and takes more than a liking to Melinda. However, a relationship is the last thing on the newly widowed Melinda’s mind. She’s determined to only focus on working with Doctor Mullins, which is easier said than done, considering Doc wants no help in his practice. He makes that perfectly clear to Melinda, who decides to leave town after being met with the not so nice Doc and unlivable living conditions. But things take a turn for Melinda when she gets to deliver a baby and Jack unexpectedly surprises her by fixing up her cabin to be Mel’s dream home.

Eventually, Mel proves to be too strong-willed to let Doc boss her around and decides to stay until the patients expecting babies have been taken care of by her. This also leads to the inevitable happening between her and Jack. Their passionate relationship is nothing that Mel expected, but everything she needed. Jack supports Mel and is determined to make her happy no matter what by offering comfort and support whenever she needs it.

Still, Mel struggles with overcoming her grief from losing Mark. What makes it harder is Mel continues to be in love with her late husband. She keeps a photo by her nightstand, talks to him as if he’s still there, and shares her days with him. To Mel, Mark is still alive in her heart, which causes friction with Jack because no matter how much Jack tries to prove himself. Jack feels like he can’t live up to Mark’s memory.

Mark was an ER doctor, caring, compassionate, traveled, and provided Mel with luxury. Something Jack can’t do. He just lives with the goal running the bar, taking care of Preacher and Ricky, while making Mel happy. But will Mel think that’s enough? The little town of Virgin River may be small, but it’s hardly less complicated than Los Angeles. But complicated might be just what Mel needs right now…or is it?

I got this book because I saw the series on Netflix and fell in love with the story. When I found out there were books, I ordered my copy of Virgin River immediately because of the cliffhanger at the end of the series. Little did I know, the books weren’t like the series. Usually, I say the book is way better. But in this case, Virgin River the novel just didn’t live up to my expectations.

I thought Mel was way stronger in the series than in the book. I also thought Jack was way more likable in the series than the book. The two main characters just didn’t do it for me in the novel. Mel’s personality in the books was flat. I had a hard time connecting to her. Then, there was Jack. Dang, I really thought after I saw the series Jack was going to be another fictional guy I loved. But Jack was not that guy in the book. It seemed like all he cared about was a physical relationship with Mel. Bottom line he just wanted her and that seemed to be his focus. The reason Jack went through all the trouble of trying to keep Mel in Virgin River.

The Charmaine character in the novel was nothing like the series, which I didn’t mind. But I hated how Jack seemed to use her then feel bad, deciding to break up with her after they got together. Doc Mullins wasn’t as well rounded as I thought either, which was an even greater letdown.

Overall, I wish I could say I loved this book as much as the series. But in this rare case, I say the series is way better than the book.