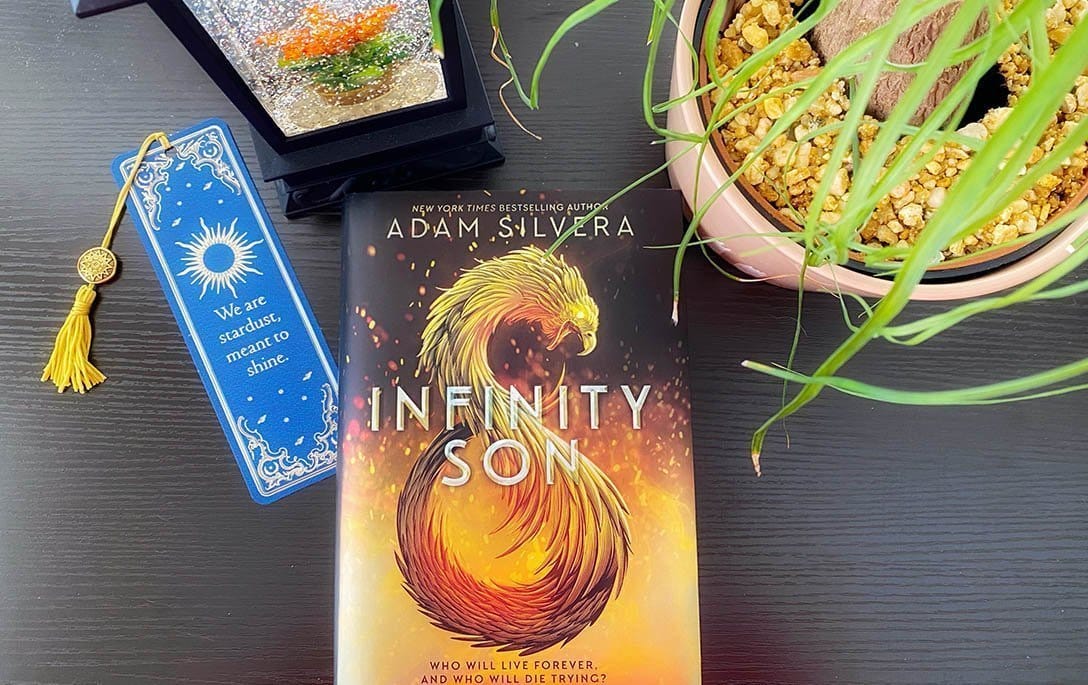 Infinity Son by Adam Silvera Review is here and making me ask myself if the bond of brotherhood is unbreakable even when one brother becomes the Chosen One in a fight he never wanted? That’s the question Infinity Son gets the reader questioning at the start of this fantasy novel.

Emil and Brighton are raised as twins in the Bronx of New York. But the world isn’t like we know it today. There are Spell Walkers present on Earth, who are celestial beings born with supernatural powers. Over time, humans wanted that power and violently figured out a way to turn themselves into them, becoming deemed as specters: half-human, half-Spell Walker. But this wasn’t the only problem Spell Walkers face. A Blackout occurred in which hundreds of innocent humans were killed, and Spell Walkers were named responsible.

Something the brothers always thought was wrong. Both Emil and Brighton idolize the Spell Walkers for their strength and speed. They prayed that on their eighteen birthday, they would get gifted powers from the Crowned Dreamer, making them turn out to be secret Spell Walkers. But no powers come, leaving Brighton more devastated than Emil.

Brighton craves the spotlight and power. He even started his own YouTube channel, creating videos of Spell Walker sightings to gain views. In striving to get a viral video, Brighton seeks to try the Brew. A potion that will make him appear to have powers. His best friend Prudence and Emil both strongly urge him not to get involved, but Brighton only sees potential views. This leads to an unexpected confrontation in which Emil suddenly exhibits phoenix power, safely getting them out of harm’s way. But this new development affects Brighton, who desperately wanted to be the one with skills, more than he’ll admit.

However, Brighton decides to accept it and be the guy behind the camera to spotlight the Spell Walkers’ heroic nature. He becomes determined to prove the Spell Walkers are the good guys and are not responsible for the Blackout. Brighton is so focused on it that his feelings for Prudence get put to the side. Even Emil, who seems to have a secret crush of his own on an unexpected guy in their circle, pushes aside his feelings. However, both brothers secretly struggle with letting anyone in expect each other after the death of their dad.

Throughout the novel, Emil has one goal. Above all, protect his brother, but does Brighton have the same ambition? Will he decide that power is worth more than his life? It’s a question that we are left wondering. In Infinity Son, just because you are powerful doesn’t mean you survive. Each character suffers heartbreak, but what they do to channel that is what makes them a hero.

I was very excited about this fantasy novel and its fresh concept. With that said, I had a hard time picturing the worldbuilding. There were times it was easier to picture it in my mind, but other times I had no idea what was going on. I wanted the concepts to be explained more because I never got a good grip on any sort of fantasy character. As esult, I assumed celestial meant angels, but it didn’t. These beings were created by phoenixes. Then came their powers, which confused me too because it took more time than necessary to figure out who possessed which powers.

Most noteworthy, I did appreciate the open sexuality. I thought Adam did a great job having a hero in the novel that was gay. However, I wanted more out of the relationships. Yes, I got the sense neither Emil or Brighton wanted to get close to anyone because their dad died, but I wanted to feel more of their reasoning than one scene. I will say I thought Adam’s last two chapters were the strongest. The cliffhangers were terrific and left me wanting to read more. With that said, if a sequel does come out, I will read it. But I just hope that the worldbuilding is much stronger because right now it just didn’t do anything for me. I wanted it to be way more powerful. What were your thoughts? Did you think the worldbuilding could be stronger, and the character’s relationships could be highlighted more than they were?