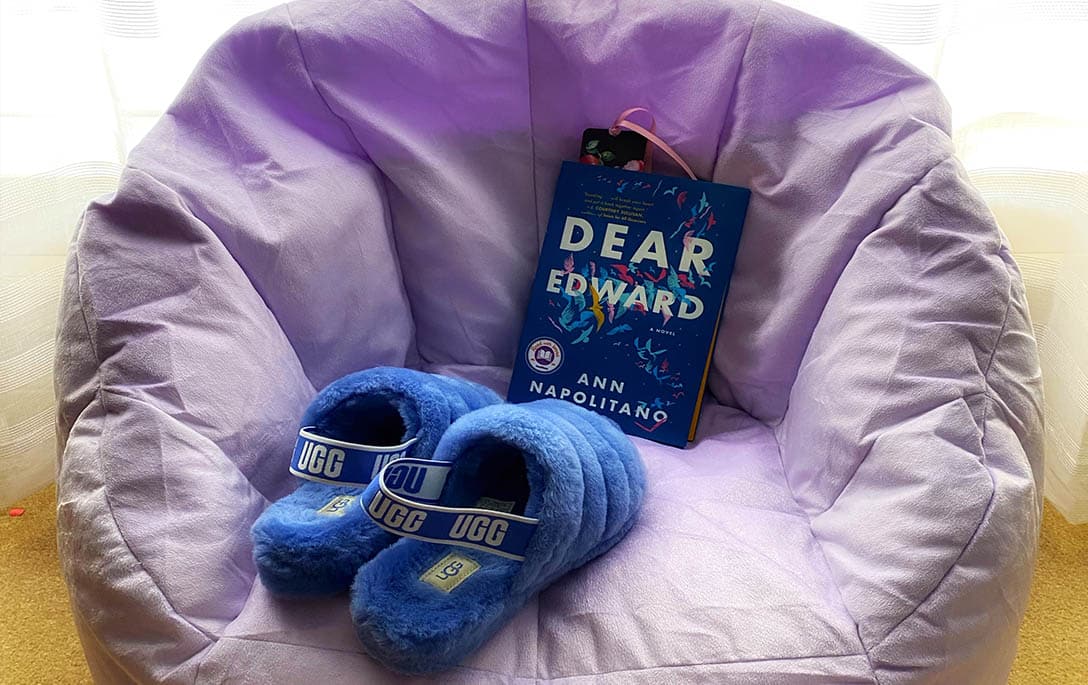 Thinking of flying or are currently on a flight? I suggest you put down Dear Edward because this novel will cause you to rethink everything and I mean everything. My Dear Edward by Ann Napolitano Review is both gut-wrenching and soothing in more ways than one. Seriously, this novel will change your life and change your perspective on living by making you reevaluate yourself, forcing you to ask one question. What if I don’t have more time? Am I doing everything I want? Have I said everything I wanted?

Dear Edward centers around Eddie Adler. A twelve-year-old boy who boards a plane with his Mom, Dad, and brother, Jordan from New York to Los Angeles for his mom’s writing job. Little do they know; they are boarding a doomed flight. It crashes in Colorado, killing 191 passengers and crew members, leaving only Eddie as the survivor. He goes to live with his Aunt and Uncle, becoming an internet sensation for surviving, but it all too much for him to handle. How can he be glad he survived when he lost everything? Now, known as Edward with his Aunt and Uncle, he struggles to find his path without sinking. Not only do we get to see Edward’s journey of living, but we also get to feel his emotions, especially when he reads letters sent to him by those that were survived by the doomed passengers.

In between reading about Edward’s path to living again, we get to learn about the passengers on Flight 2977 and their journeys. This is what makes this novel genuinely heartbreaking, reading about what everyone was going to face and looked forward to when the plane landing only it never did. The first passenger we get a good look at is Crispin Cox, a guy who’s on Forbes richest people in America list and who is battling cancer. He’s older now, bitter, but as the plane soars on, he starts to reflect on the regrets of his past, including how he didn’t spend enough time with his children.

Then, we meet Florida. A middle-age, free-spirited woman who believes she’s lived many lives and refuses to let anything hold her back. Linda, however, wants to hold back. She discovers while onboard that she’s pregnant and is terrified that the father, Gary, won’t propose when the plane lands. Then, where will she be? Next is Benjamin Stillman. A soldier from overseas going home after being shot. He’s struggling to overcome not only his injury but dealing with his own sexuality. Mark Lassio is next. He’s a high-powered businessman from New York, traveling to close a major deal. His own secret is striving to be great without the help of drugs and alcohol. It is through his eyes we move on to meet Veronica. The beauty flight attendant that has her own secret demons.

Finally, there is are the Adler’s. Bruce, Edward’s father, is a mathematician that homeschools the boys and has been married to Jane for sixteen years. Jane is a writer for major television shows. But throughout the plane ride, we discover she doesn’t really like her job. What she’d really like to do is write a movie. Jordan, Edward’s fifteen-year-old brother, is going through growing pains. He’s opinionated, mainly to test his father, and secretly has a girlfriend Mahira that he left in New York. Jordan plans on texting her when the flight ends to tell her, he doesn’t want things to break off. But little does he know…

Overall, this novel truly is a gift and inspired by Ruban Van Assouw. A twelve-year-old boy who the sole survivor of a plane crash. What makes this novel great, in my opinion, is how Napolitano interwove all the passenger’s stories along with us seeing Edward grow out of the dark hole he sunk into. But it isn’t just Edward we get to know. We meet his Aunt, Uncle, and most importantly Shay, who becomes a vital part of his life.

This story allows us to cry and laugh, along with providing us with faith and courage. The way it was written is genuinely breathtaking. A tragedy that really gets you because you get to see and feel everything the passengers did. Knowing they weren’t going to make it, makes this novel that much more heartbreaking too. Apart of me really felt for Linda, who was expecting her first baby. What made it worse was Gary never knew he was going to be a father, and Linda never really knew how much Gary loved her. I can’t tell her how sad I was when I read that.

This story will change your life and the way you see things. Don’t wait. I can tell you won’t after you read this novel. Have you read it? What are your thoughts?