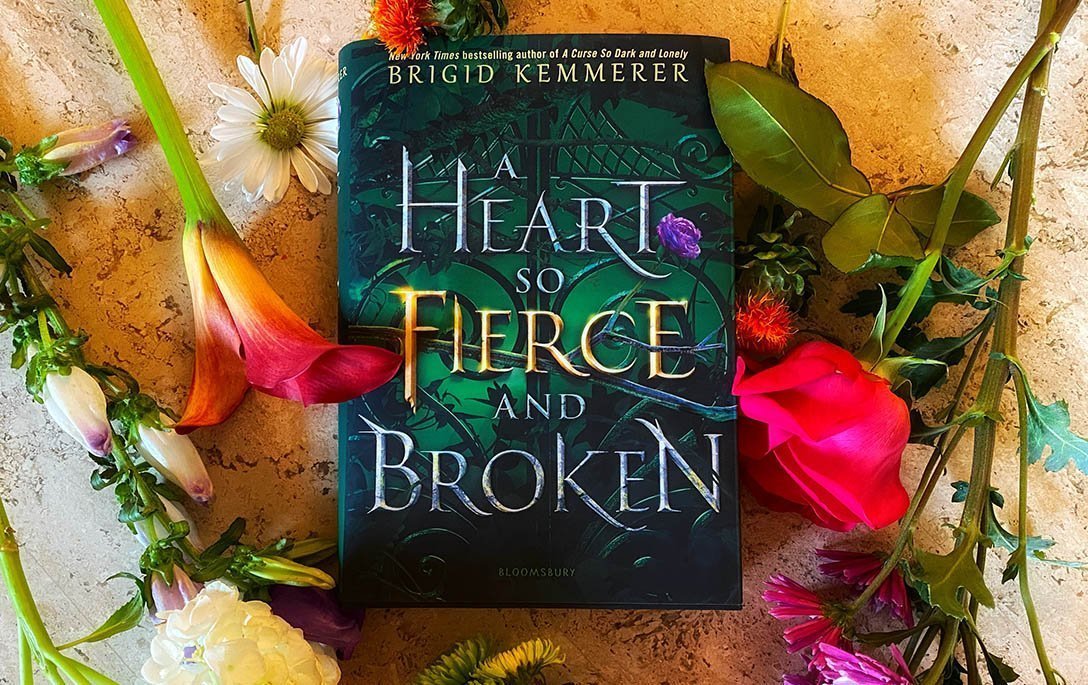 What happens when a broken curse becomes a burden? That’s the question A Heart So Fierce and Broken by Brigid Kemmerer asks in this riveting sequel to A Curse So Dark and Lonely. The story picks up months after the curse has been broken, and Grey killed Lilith. However, Grey now knows he’s the true heir to Emberall and rather than cause any friction with Rhen and Harper to stake a claim in a throne he doesn’t want. Grey goes into hiding.

Grey now goes by Hawk and is living in the small village of Rillisk outside of Emberfall, working as a stable hand for Worwick. He keeps his head down alongside Tycho. A fifteen-year-old boy who’s loyal to him and the only one Grey tells his identity too. Little does Grey realize but Rhen is out for blood in hunting down his long-lost magical brother. He won’t tolerate anyone trying to stake a claim on his throne. It isn’t until the Head of Rhen’s Guard Dustin shows up in the arena and Grey volunteers to fight to help an injured Journ that Grey’s secret is out. Now, he’s dragged back to Emberfall to face Rhen in chains refusing to tell anyone why he fled causing him to be accused as a treasonable former Commander. Once there, Grey is released from his oath, and Rhen demands to know why he left.

However, Grey won’t say the reason because he knows Rhen will kill him. With Harper continuing to love and stay loyal to Rhen, Grey sees no point is upsetting what he helped create between the two. Therefore, Grey decides that by keeping it a secret, no one will get hurt. But Rhen is driven by fear of ever having to be under the curse of magic again and isn’t who he used to be. Rhen gives Grey a day to come forth, while also imprisoning the eldest daughter of Queen Karis Luran, Lia Mara, who just sought peace between the kingdoms.

It is then the story truly gets us whisked up into a whirlwind as Grey, and Lia Mara meet. Instantly, Lia Mara realizes why Grey hid from Rhen. She knows that Grey is Rhen’s brother, who possesses magic. But rather than give away his secret, Lia Mara helps Grey and Tycho escape alongside Harper’s brother Jake and Noah. With Grey’s lineage exposed and his magic revealed, Grey has nowhere to stay safe. It leaves him no choice but to agree to seek refuge in Syhl Shadow and accompany Lia Mara home.

The trip back brings Grey and Lia Mara closer, allowing them to trust each other. Neither is what the other expected. Lia Mara sees that Grey has a vulnerability side, while he sees she is much stronger than she knows. However, Lia Mara realizes she’s not the true heir and therefore refuses to give in to her feelings since Grey will be tied to her sister Nolla Verin.

Once inside Crystal Palace, Grey doesn’t let his uneasiness get to him in front of the merciless Queen Karis Luran. He announces he will stake a claim to the throne of Emberfall for the good of the people with Jake at his side. This leads him into the arms of Nolla Verin. But Grey isn’t willing to forsake his feelings towards Lia Mara, which causes Lia Mara to be imprisoned. I won’t give away the ending, but I will say. This leads to a dramatic conclusion of the novel, which you will have to read to find out. Who survives and does Grey actually go through with attacking Rhen in Emberfall? Also, you don’t want to miss the fantastic epilogue!

Overall, this book was a fantastic surprise. At first, when I read Chapter 1, I thought this would end up being some melodramatic love triangle novel. However, I was so and so glad I was! We get to really see Grey shine in this novel alongside the character of Lia Mara who I truly adore! She is a breath of fresh air in this series and I love how strong she is inside and out. Lia Mara knows what’s right from wrong and throughout the novel, we see her genuinely harness it. On the flip side, we also get to see Grey become someone stronger than even he thought. He listens to others and trusts their opinions, unlike Rhen ever did.

I would definitely say this novel is even better than the first, and for me, that’s saying a lot. Usually, in the second installments, you have to read the first book to really get into the story, but not with this novel. It stands as a strong stand-alone, which I love. Bridget Kemmerer did an excellent job interweaving the first novel with this one. She never overcomplicates any part of the story, and instead made it a book you don’t want to put down. I read this in a day, and the characters stayed with me. It was nothing that I expected and yet everything I wanted!

Have you read this novel? If so, comment below!

Title: A Heart So Fierce And Broken
Author: Brigid Kemmerer
Pages: 445
Where to Purchase: Amazon, Barnes and Noble, Target
I rate it: 5/5