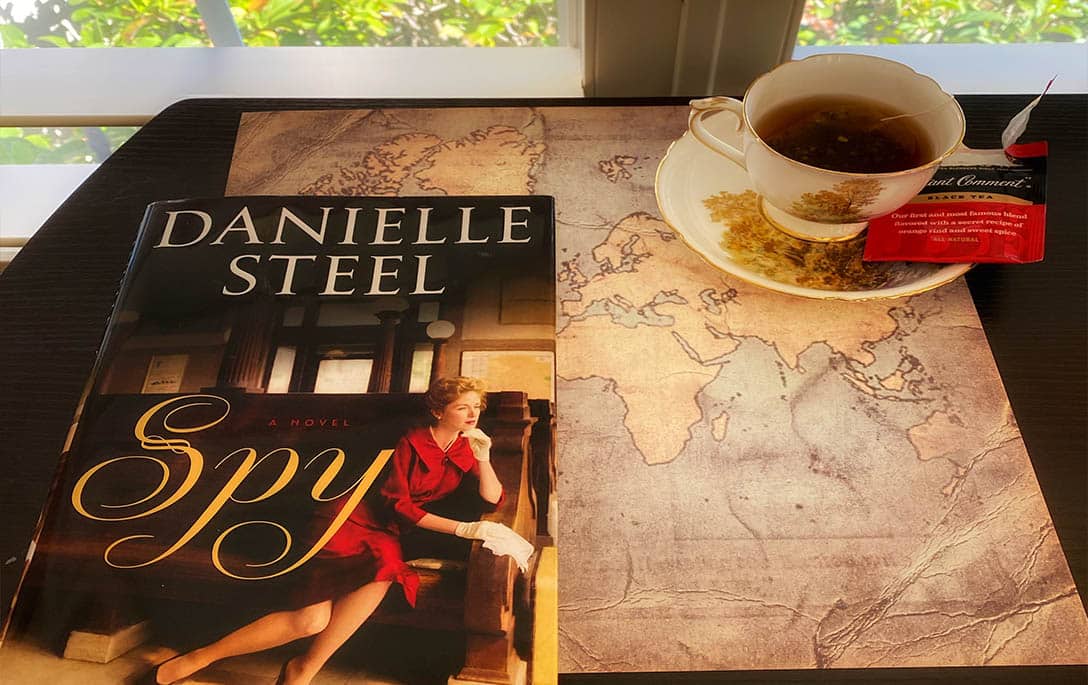 Finally, Spy by Danielle Steel review is here! The main question of Spy is who would suspect a young, blonde-haired girl who volunteers at the First Aid Nursing Yeomanry at the break of World War II as a spy? The answer is no one which is why Alexandra Wickham was selected by the SOE to join. She not only fits the physical description of an innocent woman, but she is bright, fluent in many languages and determined. At first, Alex is hesitant to take on such a risky task, but when unexpected heartbreak occurs, she decides to join. Soon after completing training, Alex gets involved with Richard Montgomery. A soldier that leads a fighter squadron. With every day uncertain of survival, their whirlwind romance begins.

Alex continues her missions as a spy being thrown into dangerous, life-threatening situations all to bring justice and the end of the terrible war. With daily bombs threats on top of all the SOE missions, Alex no longer is who she was in Hampshire where she grew up. Once a young woman who came into society in front of King George V and Queen Mary, with expectations to marry someone with a title. Alex is no longer the same person. No one is during this difficult time of war that brings suffering to everyone. With loss always following her, Alex seizes every moment she has with Richard, treating it as a gift.

When war finally comes to an end, Alex and Richard finally begin their life together. One, they waited to start due to the conflict and uncertainty of survival. With the war over, Alex’s assignments with SOE finally conclude, making Alex feel strange. Putting up her knife and guns, Alex doesn’t look back. She receives metals for her service which Richard doesn’t directly question. Though, he always suspected she did more than volunteer as an ambulance driver. Soon after their life begins as one, Richard starts working for the diplomatic corps, gaining a respectable Foreign Officer position. They would be required to move every four years to a different country. An idea Alex loves because she didn’t like the idea of settling in Hampshire just yet. She loved being independent during the war and wanted to continue with her jet setting life.

Her parents don’t like the idea, especially since their first post is in Indian, but Alex wants to follow her husband, so they reluctantly agree to let her go. When news gets out of Alex’s plans, the M16 contacts her to start working as a spy again. With the war over the assignments are basic. She just needs to invite specific people to dinner and report on the names of people she comes into contact with. The tasks are basic until she reaches Hong Kong. Then in Russia, things become dangerous again, leaving Alex questioning her life as a spy when she knows if she gets caught, there is no saving her. With her time in India, Pakistan, Morocco, Hong Kong, Moscow, and finally Washington D.C. all be places she goes unnoticed? More importantly, does Richard ever find out the truth about his wife’s work?

Throughout the novel, we see Alex grow and start a family. Though, it turns out to be anything but easy, making her spy work look far less grueling. But do Alex and Richard overcome everything and remain faithful to each other not just during war but in life? Or does being a spy create a wedge in her life that cannot be removed?

Overall, I really enjoyed this unique novel. Not only was it a historical, but it was also fascinating. Steel incorporated the military along with vibrant city backgrounds and cultures. You got a sense of Alex and where her life started along with being taken on all the adventures with her. I really enjoyed how the story unfolded and the way it was told. It was very unique and unlike any other book I read. It was sad though and the chapter, in the end, reminded me of The Notebook. (If you read it, you know exactly what I’m talking about!) But overall, this was a great read. I got the sense of loss and love, as well as the choices Alex made.

The character of Alex was my favorite. She was strong and empowering. Yet we saw her vulnerable with Richard. The two of them were really made for each other with Steel captured brilliantly. She didn’t let their relationship or romance overshadow Alex’s job as a spy, a mother, or who she was at heart. If you have not read this novel, I definitely recommend it!