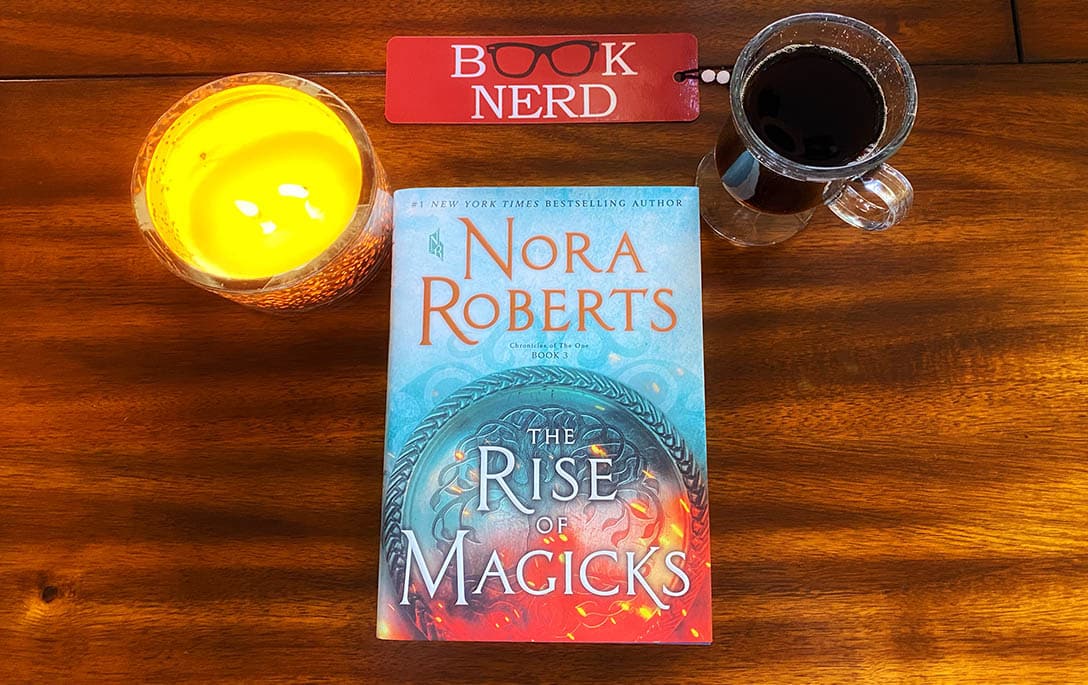 Is there light at the end of the Doom? That’s the question The Rise of Magicks by Nora Roberts, book 3 in the trilogy, has the reader questioning. It’s been twenty years since mankind was almost wiped out by a deadly virus. The story picks back up following Fallon Swift, aka The One along with her close-knit family within her community of New Hope. Fallon is ready to fulfill her prophecy and rise to the position of leading the armies of Light for Life against the Darkness within the Earth. But getting ready to spread the light by overtaking cities and saving innocent Magicks from the corrupt hands of the sinister people is easier said than done.

With her brother Colin’s help along with Mallick, Mick, Tonia, and most importantly, Duncan—Fallon’s plan of action begins. Arlington is the place on her list along with Utah. Then Fallon plans to overtake Washington D.C. and end with New York City. Not only does she have to focus on fighting the Dark Uncanny’s warped soldiers, Jeremiah White, Hargrove, and, most importantly her biggest nemesis—Fallon’s evil cousin Petra. But Fallon must overcome herself in this riveting final novel of The One trilogy.

Will Fallon Swift be able to rise to the occasion she was prophesized to complete with the help of her friends and family? More importantly, will Duncan fulfill his promise and come back to Fallon after all the time past? It’s a question that keeps you guessing as Roberts keeps the reader on their toes in this final gripping novel in the conclusion of good vs. evil.

Overall, this novel was interesting to read. At first, I struggled with the plotline because those that haven’t read the first two books, you will be lost at the beginning of this novel. That was one drawback I found was that if you did skip the previous stories figuring this one out would’ve been a little bit of a struggle. Another lack in this novel was Fallon and Duncan’s relationship. I really liked the characters, but I felt their relationship lacked development, taking big leaps in little time. Whether that was due to their strong connection or not, I wanted to feel it was and I just didn’t get that.

Finally, I thought the battle scenes were also rushed at times. The novel was very long, but I wanted to see more training and feel the characters pushed to their limits in battle. I didn’t get that feeling. Yes, Fallon Swift is strong and amazing. But I wanted to feel that too. I’m more of a visual reader wanting to dive into the characters and Fallon lacked that for me, even though she had the potential to be a great heroine and was at times. However, it just seemed like just because of who she was, Fallon just always fought fearless.

There were also concepts, that weren’t always explained the greatest. I would’ve liked this novel to be more detailed in certain areas. Again, if you didn’t read the previous books, this one could have confused you, which I found fault in. I also kept thinking back to Hunger Games, and how Fallon reminded me of Katniss. Did anyone else get that vibe too?

With all that said, I LOVE strong female characters who kick butt, so regardless of things I found wrong, this novel I really did enjoy. I’d reread it easily. I did enjoy the character of Fallon Swift that much. I just wanted to keep seeing more from her. My favorite chapter of this novel is definitely the Epilogue. I thought it concluded the book very well and was kind of an ‘aw’ moment.

Title: The Rise of Magicks
Author: Nora Roberts
Pages: 454
Where to Purchase: Amazon, Barnes and Noble, Target
I rate it: 3.5/5