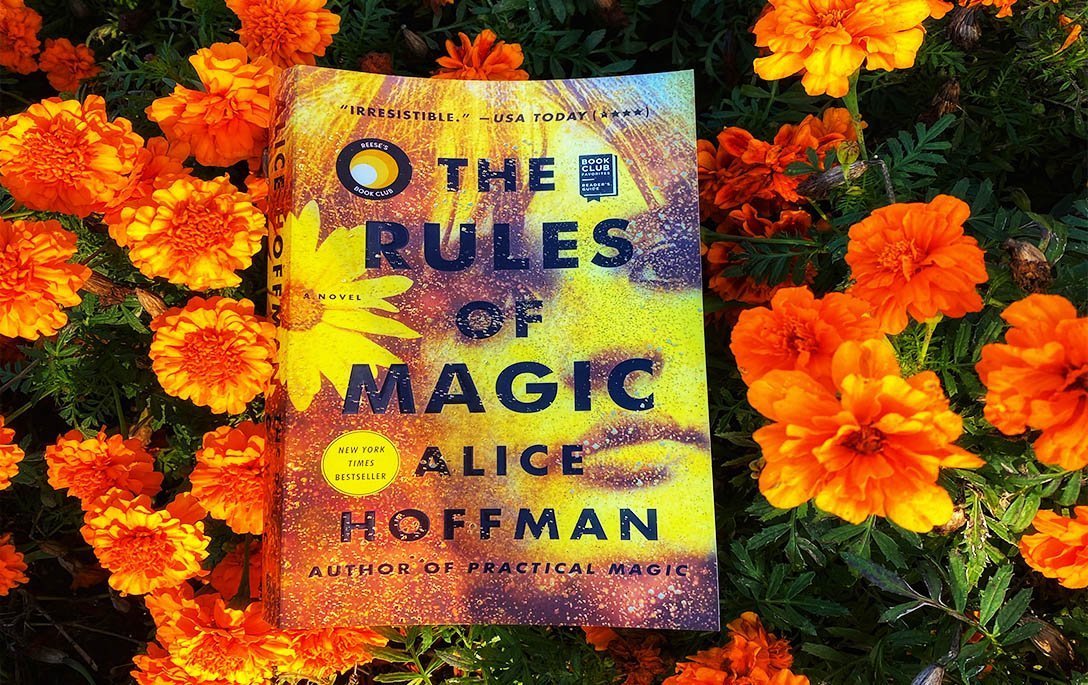 Do you believe in magic? The Rules of Magic by Alice Hoffman is the prequel to Practical Magic and centers around siblings Franny, Vincent, and Jet. All have strong bloodlines to witches, but they grow up not knowing their ties to the world of magic. But are told by their mother Susanne to abide by strange rules like don’t wear red shoes, avoid cats…the list goes on. But the main one is never fall in love, due to a curse.

It isn’t until they spend a summer with their Aunt Isabelle in Massachusetts, arriving at her house on Magnolia Street, everything changes. With absolutely zero rules in the house, they spend the summer doing whatever they want. Eating cake for breakfast, going out at night and spending their time with whoever they want. Slowly, they start to realize their past is what they are bound too, Vincent more than anyone. However, Franny never accepts the possibilities of being a witch, even though it’s obvious when they go to the lake to swim. Witches can’t drown, they are buoyant in water. Something that happens to Franny, Vincent, and Jet. But when summer ends, will Franny embrace who she is or run from it?

As time goes on, Franny does her best to keep her family together while ignoring her true feelings for Haylin. She admits to herself she really loves him, so much that she won’t let him fall prey to the family curse by acting on it. In the end, though, will Franny outrun the curse, or will it run her? For Vincent, his playboy ways lead him onto a path he never saw coming. Unlike his sister, though, Vincent doesn’t care he breaks the curse by falling in love with someone very unexpected. But will the curse intwine itself to break his happily ever after? Jet, however, only gave her heart once to Levi. But with a tragic end to their future, can Jet overcome the loss to live?

Throughout the novel and overtime, we see the siblings grow and go onto paths they never thought they’d be on. Will they all embrace who they really are before it takes one of their lives? Or will they all live a life unfulfilled and unhappy?

My favorite quote in the novel is “Was your hair with rosemary. Drink lavender tea when you cannot sleep. Know that the only remedy for love is to love more.”

As much as I want to give this a novel a good rating, I can’t. I just wasn’t a fan of this novel. Yes, I do think it was uniquely written. Instead of chapters, there were excerpts that took place at different times in their life. However, for me, it didn’t provide enough of a draw to really fall in love with the characters.

Vincent was too much a playboy and always at a bar never taking responsibility even though he needed to step up for his sisters. Also, as he got older, he never really took the big step, which I was disappointed about. Franny was with Haylin but never ran after him, even though I think she should have. Instead, she chickened out, and not once did ever tell him she loved him. Maybe it’s because I’m a romantic but come one…I needed to read at least one confession of love between them from her and I never did! Jet was also a heartbreaking miss of a character. I really sympathized with her over losing Levi, but her story basically ended there. Everything after Levi was tragic for her and it pained me to never see the potential strength Jet had in her.

What really got me about this book, though was the fact there was no rules Aunt Isabelle’s house. I still don’t see the point in that. Another confusing part was the mix of magic and realism. I got that it took place in NYC and then Massachusetts, but there were references to magical places making me unsure if it was fantasy or realism completely. I really wanted to give this novel a good star review. But for me personally, this novel and the characters didn’t live up to the potential they could have.

Have you read this novel? What are your thoughts? Comment below and remember if you have a book you want me to read Contact Me.

Title: The Rules of Magic
Author: Alice Hoffman
Pages: 366
Where to Purchase: Amazon, Barnes and Noble, Target
I rate it: 2/5

Rites of Passage by Chad Lehrmann