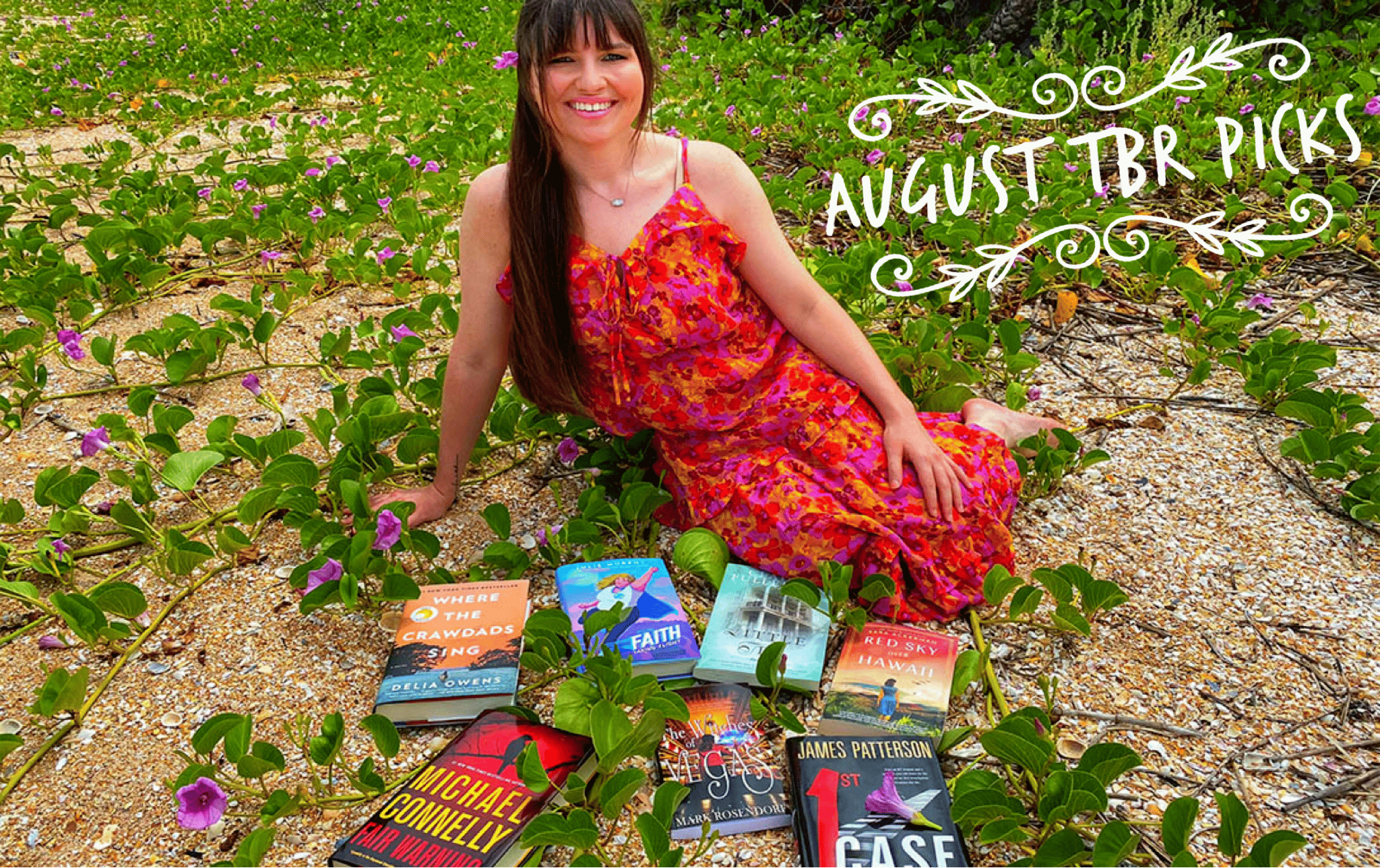 My August TBR Picks are here.

There are so many amazing books on the shelves, and it was hard for me to decide which books to add to my TBR pile for the month. I am so excited to reveal that the books I recommend reading through the month of August are…Where the Crawdads Sing by Delia Owens, Faith Taking Flight by Julie Murphy, Little Tea by Claire Fullerton, Red Sky over Hawaii by Sara Ackerman, Fair Warning by Michael Connelly, The Witches of Vegas by Mark Rosendorf, and 1st Case by James Patterson.

Where the Crawdads Sing by Delia Owens centers around Kya Clark, known as the ‘Marsh Girl.’ She was abandoned by her family and left to grow up on her own out in the marshes of North Carolina. This novel takes us on Kya’s journey, growing up through adolescence, first love, heartbreak, and learning to build a life on her own. It even throws a twisted mystery in the mix when the attractive Chase Andrews is found dead. Everyone suspects the ‘Marsh girl,’ but Kya denies the allegations because she is so much more than what they think of her. Who murdered the local wealthy young man everyone respected?

Faith Taking Flight by Julie Murphy is a YA novel that centers around Faith Herbert. A plus-size superhero from Valiant Entertainment comics. Faith is an average teenager with two best friends Matt and Chess. She also loves animals and volunteering at her local shelter. Not to mention she is obsessed with the tv show The Grove. The only thing that makes her different is she can FLY! This discovery changes Faith’s life in more ways than one. But what stuns her is when her favorite tv show relocates to her small town to film. However, when dogs and people go missing, Faith starts putting the strange occurrences together. Will she really be a superhero in her own right?

Little Tea by Claire Fullerton centers around Celia Wakefield. She comes from a prominent Southern family and now lives in California with her husband. But one call from Renny that their good friend Ava needs them sends her back to her Southern roots and a life she wanted to keep in the past. When her old boyfriend shows up at the girls’ lake house that weekend, Celia’s memories get unlocked, forcing her to confront a family tragedy that changed her life forever. In the end, can friendships triumph over history? Find out when you read this novel that takes place between the past and present interweaving a heartfelt story.

Red Sky over Hawaii by Sara Ackerman is a historical fiction novel. It follows the character of Lana Hitchcock, who returns to the Big Island to make amends with her father. However, she arrives a few hours too late, discovering he left behind clues in case of a war. Coincidently, Pearl Harbor gets bombed hours later, and the local authorities start arresting the local Japanese alongside any citizens from German descent. This includes her father’s neighbors leaving the children alone. Lana decides she can’t leave their daughters’ alone and flees to her father’s secret property on the remote Kilauea volcano. She also risks taking Mochi and his son Benji. Will they be discovered? It gets even more dangerous when Lana starts to feel for the man in charge of the local detainment camp.

Fair Warning by Michael Connelly is a crime fiction novel, centering around Jack McEvoy. A veteran reporter who stumbles upon a case after he finds out a local woman he had a one night stand with was murdered. Jack decides to take upon himself to investigate the case. However, the more he uncovers, the more dangerous things turn, especially when he uncovers this was done at the hands of a serial killer who is targeting his victims. Staying one step ahead of the detectives means Jack is closer to unveiling the truth than anyone. But his discovery is about a lot more than just a story. The mystery comes down to three letters—D-N-A.

The Witches of Vegas by Mark Rosendorf is a YA fantasy novel. It centers around a group of witches who use their magic on the Las Vegas Strip in a magic show. Fifteen-year-old Isis Rivera was adopted into the witch family, making her magic debut on the strip. Zack Galloway, also her age, is the nephew of another magician in Vegas. One who doesn’t have powers making him the last act in Vegas. Isis and Zack should be rivals. But when a four-hundred-year-old witch comes back into town, will they unite and stop her once and for all?

1st Case by James Patterson and Chris Tebbetts centers around Angela Hoot. A genius programmer who gets recruited into the FBI. In her first case, Angela has to not only deal with facing her first crime scene. She must also face controlling her obsessive mind. One thing for sure is this new killer targeting young girls, and their families aren’t stopping anytime soon. It puts not only Angela but those around her in grave danger. Will she be able to survive her first case both physically and mentally?

I’m so excited to dive into these novels. COMMENT below if you’ve read any of these? Which books are you reading?