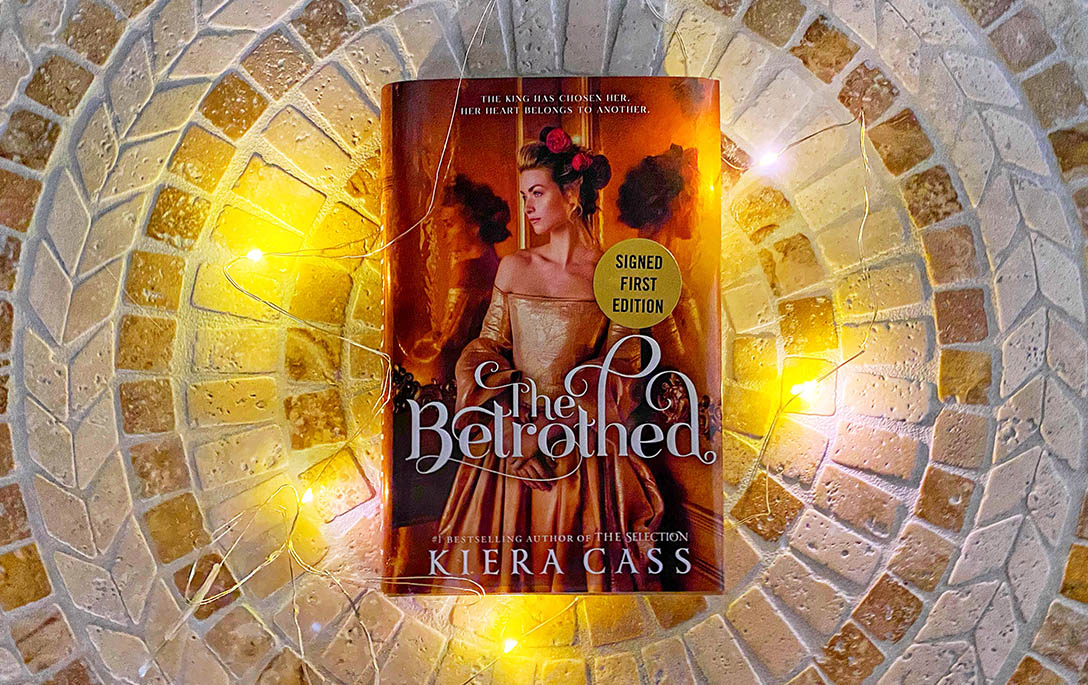 The Betrothed by Kiera Cass Review is here. This book centers around Lady Hollis Brite, who grew up in Keresken Castle among the nobility. Her best friend, Delia Grace, is her one confident. Her King, the handsome Jameson, has his eyes on Hollis. At first, Hollis thinks it all a game since the King has many girls he favors in court. However, it soon becomes clear he wants Hollis as his bride.

At first, this turn of revelations thrills Hollis. She thinks of all the glitz and glamour the Queens of Coroa behold along with the great legacy they each leave behind. Hollis wants that. She wants to make a name for herself, so she is always remembered in the history of the kingdom. Yet, Hollis soon learns not everything is as she thought. Getting whisked up into the image of Queen before a formal proposal and marriage is overwhelming for Hollis, especially since she must win over King Quinten and Queen Valentina.

Their visit exposes that not all kings play nice, and not all aspects of being royal are good. Hollis can’t imagine sacrificing her happiness, particularly when a pair of certain blue eyes always remain in her memory. Silas Eastoffee is from King Quinten’s land of Isolte and fled their country to seek refuge in Coroa. The Eastoffee family has many secrets. They are commoners among the Coroa people. But Hollis doesn’t care. She can’t stop thinking about Silas or his eyes.

Will Hollis turn down a proposal every girl in the world wants for a commoner? Will she disappoint her parents and sacrifice her position in society? You will have to read the novel to find out.

Overall, this book was a fast read. I read it in about six hours. However, I found the storyline to drag on very slowly and was a bit choppy. There were so many frivolous scenes that didn’t round the plot or develop the characters. For example, the ending was great and is the one thing making me look forward to the next book. But it happened so fast that it left me with so many questions that I should have had answered.

As far as characters, I was never fully captured into Hollis as a protagonist. I liked her, but I wasn’t able to feel her emotions enough to really lure me into her as a character. In a way, I felt like Kiera Cass wanted Hollis to be empowered, but it never got there. I just didn’t feel like she knew enough to make the life-changing decisions she made and if the plot was developed more giving us answers it would have rounded Hollis out in the novel. As far as King Jameson, he was kind, but at times I felt like Cass wanted him to come off controlling. Yet, it didn’t really come across gripping enough to make me feel that side of him. I did enjoy Silas. But again his story was left in limbo where if it was developed more it would’ve made those two one of my favorite YA couples.

I really wanted to love this novel as much as I loved The Selection by Cass. However, with the gapes in the plot and an ending that was randomly put out there it didn’t accomplish that. I kept waiting for things to tie together, but in the end the novel fell flat. I didn’t hate it, but I didn’t love it. Hopefully, book two will finish this duology off with a punch!

Title: The Betrothed
Author: Kiera Cass
Pages: 307
Where to Purchase: Amazon, Barnes and Noble, Target, Books A Million
I rate it: 3/5