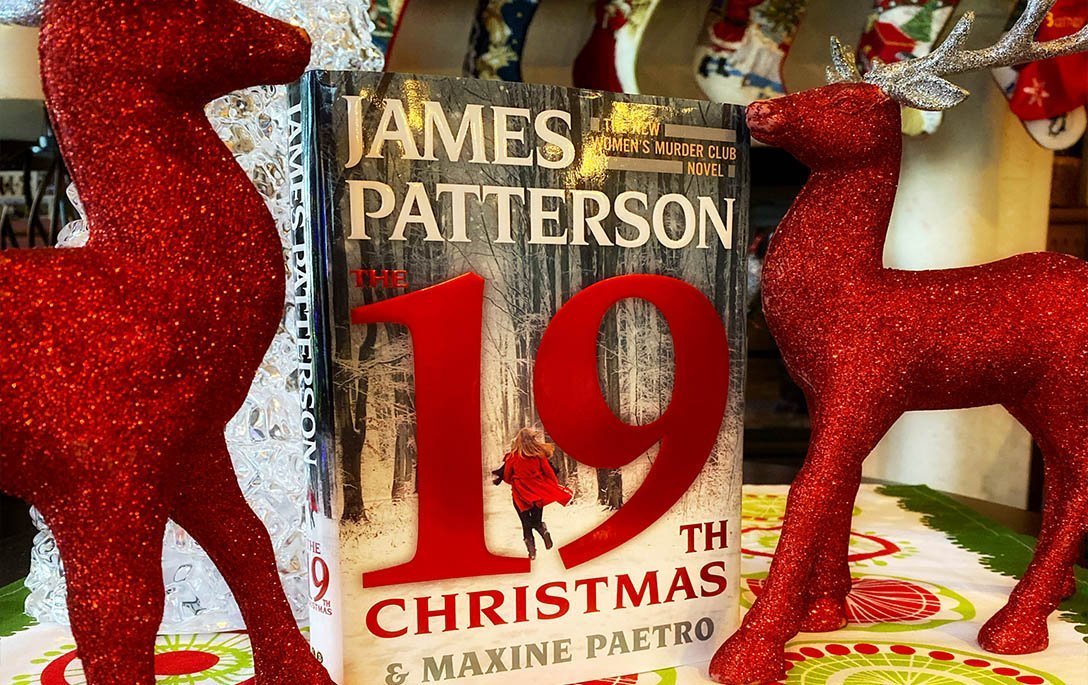 Buckle up for a Christmas Day whirlwind of crime adventure! The 19th Christmas by James Patterson and Maxine Paetro is an easy-to-read Christmas crime novel. The story centers around Detective Lindsay Boxer, journalist Cindy Thomas, Boxer’s partner Rich Conklin, Boxer’s ex-partner Warren Jacobi, attorney Yuki Castellano, Lieutenant Brady, and Willy Loman. Yes, that is a lot of characters, and yes, each (short) chapter centers around one of the characters. So, here goes The 19th Christmas by James Patterson Review!

The novel starts off with the SFPD arresting Julian Lambert for shoplifting. When Julian reveals there’s going to be a big heist on Christmas Day run by crew chief ‘Loman,’ the plot begins. It’s all about when, where, and who this illusion Loman is that’s trying to ruin Christmas day with a heist in the city. Boxer and Conklin focus on tracking down who they think will be the key to solving this case and ending it before Christmas. However, little do they know the wild goose chase they are sent on is all planned by Loman, which at times leads to heart-thumping turns and fatal ends.

It doesn’t help the SFPD, no one by the name Loman is in the system. Mainly because Loman uses other people to do his work for him. Instead, he goes by the name of William Lomachenko and is married to Imogene. They live in a modest house while he sells jewelry to stores. A simple life, but his alias leaves the SFPD chasing his elusive and deadly ‘Loman’ identity which turns out to be more and more real, as bodies start piling up.

Will the SYPD realize they are being played in time to stop this Christmas Day heist? Or will they continue on the path Loman had planned out for them? Only time will tell as they all follow in his predicted footsteps. With many twists and turns of the characters, I honestly didn’t see what was coming. I kept reading the chapters from Loman’s perspective than from Boxer, hoping she’d realize they were getting played!

Meanwhile, Yuki and Cindy are busy trying to exonerate a falsely accused immigrant, Eduardo Varela, of murder. Will they be successful? It’s a tricky situation neither of them can work miracles to correct, but with a little Christmas magic added into the equation, it can happen…right?

Everything only gets more stressful because its Christmas, and everyone wants to be home with their families, but can this crime be solved before Christmas Day?

Overall, I found this book an easy read. It only took me eight hours to read it from cover to cover and I loved the Christmas aspect. It was great and very o picture. The chapters were concise, which surprisingly, I liked. However, I did find some areas a little confusing when it came to which character the story was being told from, making me question if there were a little too many characters involved. Personally, I think yes. A few characters could have been made more central in the story to really grab the reader’s emotions in connecting to them. But with that being said, Patterson and Paetro’s use of characters made the story progress rapidly.

The good thing about the novel, though, was it was easy to understand their perspective. Did I want more action? Yes. Did I want more twists? Yes. But did I like how skillful Patterson and Paetro wrote the novel from Loman and then the SFPD However, if you haven’t read any of the other books, you may be left wondering who Claire and Edmund are and why they were mentioned in the prologue and not in the novel. So, for me, the things I didn’t like were overshadowed by the things I did like. One thing I remain unsure about, and that is the cover. Yes, it’s gorgeous and made me buy it, but there was no girl in the story wearing a red coat nor were their woods. If you know why this cover was picked comment below!

My favorite part about The 19th Christmas by James Patterson was Eduardo’s storyline. It was heartfelt and bittersweet. Did you see his ending coming? No matter how it turned out, it was great to see Cindy fighting to get justice for him. I was really pulling for his storyline to have a happy ending. You will have to read the novel to find out if he did get that in time for the ! Also, if you want me to do a book review of your novel. Contact ME!

Title: The 19th Christmas
Author: James Patterson and Maxine Paetro
Pages: 339
Where to Purchase: Amazon, Barnes and Noble, Target
I rate it: 3.5/5

The Mythical Universe: The Beginning by Alicen Scott

Evening in the Yellow Wood by Laura Kemp