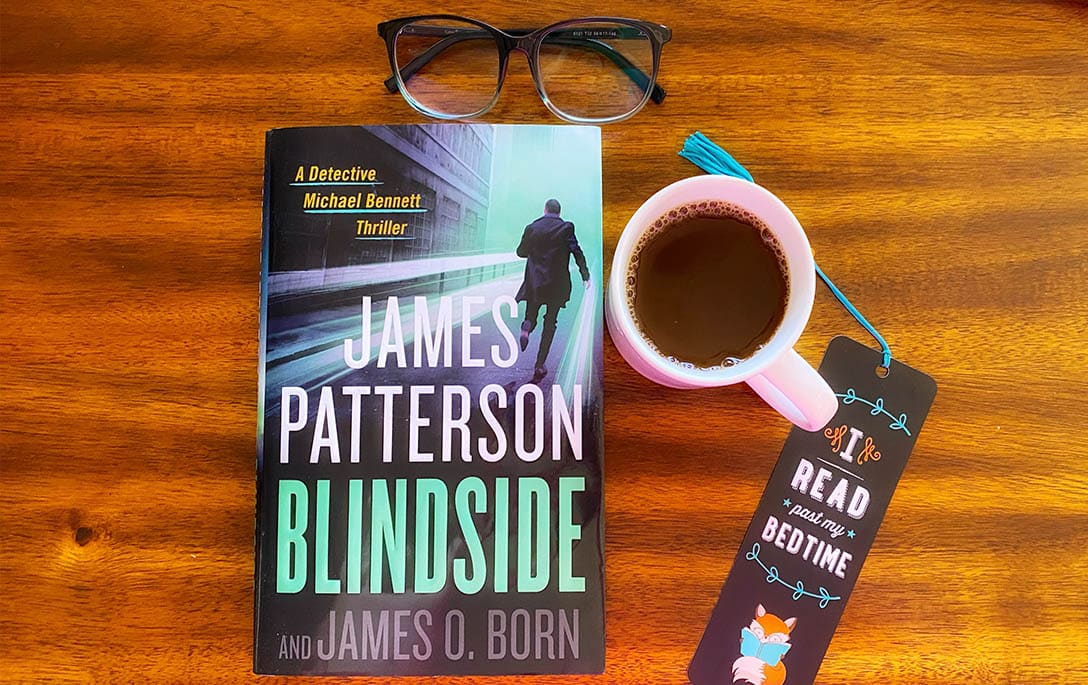 Blindside by James Patterson review is finally here for my readers. This thriller novel centers around Detective Michael Bennett. A Manhattan North Homicide detective. He gets dispatched to a grisly scene of a mother and daughter murder scene. Detective Bennett escorts Mrs. Evans, the mother and grandmother of the victims home a few blocks away. On his way back to the scene, someone corners Bennett to mug him. The suspect, RJ, is a young black man who Michael has no choice to shoot when Tight courses him to kill Michael.

Michael’s defensive action causes an uproar from the black community and the media, where the story reported is far from the truth. It is fueled by Reverend Caldwell, who is trying to make people in the Bronx believe Michael wanted to shoot RJ. It’s a media circus that gets Michael temporarily off the force. A turn of events that makes the Mayor of all people reach out to him. The Mayor petitions for Michael to find his daughter Natalie who’s been missing for three weeks. He doesn’t want to report it because the Mayor doesn’t want anything hurting his image.

The Mayor explains Natalie went to MIT and is a computer genius but went ‘off the rails’ recently. He thinks she got into the wrong crowd, and someone kidnapped her.

Michael takes on the task because he’s the father of ten and couldn’t imagine one of them missing, even if one, Brian, is in jail. Something the Mayor tells Michael he may be able to do something about as long as Natalie is brought home. This gives Michael the drive to find out where Natalie is. Soon this small task turns out to be deadlier than anyone anticipated. When the body of Tommy Payne turns up, who is one of Natalie’s friends. Michael realizes Jennifer Chang is the next targeted victim. Will he get to her before the assassins Alice and Janos?

One thing is for sure. All this relates to Estonia, where Michael came across Natalie buying an airline ticket too. It is there Harry Grissom resides with his hacker operations leading Michael to make a trip of his own. Estonia though is far deadlier than Michael anticipated. He faces deadly threats, but he must live long to save Natalie. But does Natalie want to be saved? Even if she does…will Natalie survive? It’s a question that keeps us asking ourselves. Harry is someone who owns the internet and knows every way to manipulate it to track anyone, anywhere, meaning no one is safe. Not even Michael’s family.

This is a Patterson thriller that novel that will leave you holding your breath every page you turn!

Overall, this was another great novel for Patterson fans. Was it my favorite? No. Only because I like a little more mystery. I already knew who the killers were, which made me a little disappointed, and we never found out if they found Oscar! However, for a thriller novel, Patterson did a fantastic job of having us hold our breath. Estonia had my heart racing every sentence I read!

I recommend checking out this book. You will want to close your eyes but won’t be able to tear yourself away from the novel! Have you read this book?

Title: Blindside
Author: James Patterson
Pages: 360
Where to Purchase: Amazon, Barnes and Noble, Target, Books A Million
I rate it: 4/5