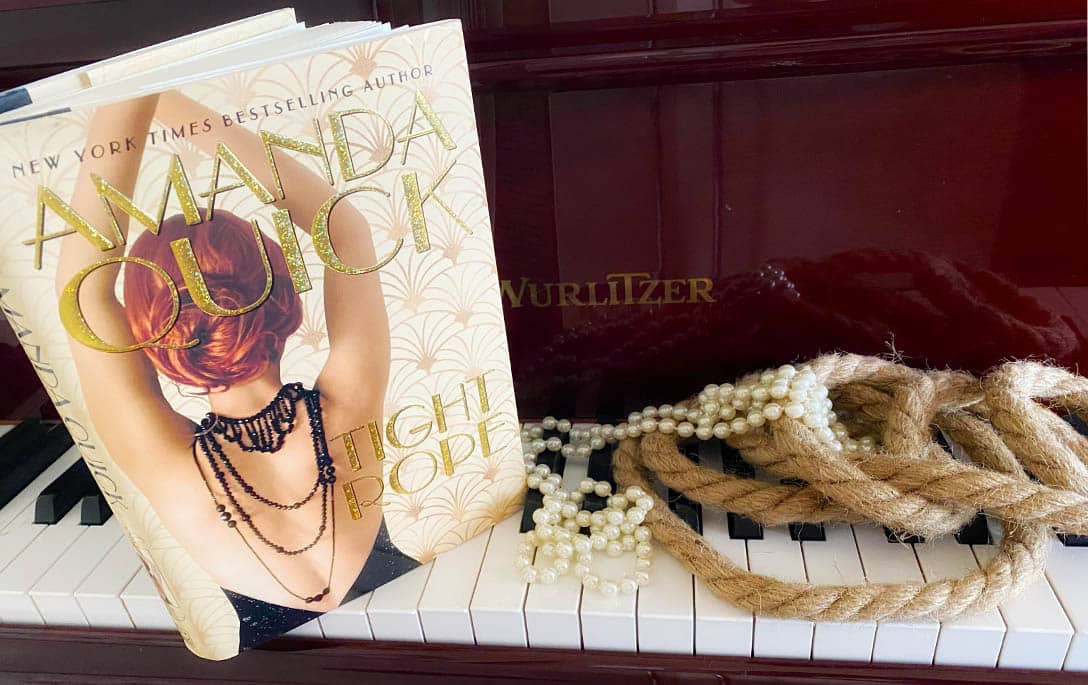 Tightrope by Amanda Quick Review is finally here. This heart-pounding, crime-solving novel centers around former trapeze artist Amalie Vaughn once known as the Flying Princess. After almost getting murdered by a serial killer Marcus Harding, Amalie leaves the circus. She uses her savings to buy an inn located in Burning Cove with her Aunt Hazel to escape her past, unable to believe the deal she got for the place. However, Amalie soon discovers the reason it was a steal was because the Psychic to the Stars, Madam Zolanda, died at the inn after predicting her own death. An unsettling event that left no one wanting to stay there.

Things start to look up when Dr. Normal Prickwell books a room. He’s in Burning Cove to present his latest invention Futuro. A robot that many ponder if it’s a good idea. However, when he is murder by what appears to be Futuro during his demonstration, things take a deadly turn. Not only is Amalie’s inn now dubbed ‘Psychic Curse Mansion,’ but the murder of Prickwell involves Amalie since he was staying at her inn.

The mobster Luther Pell gets involved with the investigation along with Matthias Jones. A man who wears a concealed holster, exhibiting he too, is connected to the criminal underworld. But Amalie is surprised that his connections don’t change the fact she is highly attracted to him. Their passion leads to an unexpected twist in this dark storyline. Neither Amalie nor Matthias ever expected to find each other, but with one having to trust that a lover wasn’t murdered and another’s gift to read anyone’s lies. Will they decide to do the unthinkable and trust each other?

Amid their decision, Amalie’s past comes to haunt her, bringing forth another who wants to kill the ‘Flying Princess.’ Will Amalie be able to escape before she becomes the next victim of her cursed mansion? Better yet, when Matthias tells Amalie, Prickwell wasn’t an innocent inventor. He was in possession of a cipher machine that he stole things turn deadlier. Break-ins, grenades, spies, and new targets threaten every page. Will you be able to guess who the elusive killer is before the story unveils it?

Overall, I thought the mystery part of Tightrope was one of the best I’ve read so far this year. It was heart pounding and compelling leaving me with no idea who the killer was seeking the cipher machine. I really was stumped! The romance, however, just didn’t do it for me. Amalie and Matthias had passion, but there was no real storyline about either of them to tell us what they really liked about each other. There were moments in the book where they were together, but there was no reason for me to pull for these characters. I think there needed more storyline involving the two to be cement as a character couple I’d root for.

The storyline was fresh, but at times when it jumped from the killer to Amalie, I immediately thought of James Patterson’s novels. The storyline was strong enough on its own, and the mystery was stumping enough. I think Tightrope could’ve held its own without jumping from character to character. It ruined the mystery of trying to figure out who was targeting Amalie from her days in the circus.

I would recommend reading this novel because of how great the mystery part of it was. As for the romance, it was just okay. The passionate moments seemed like an afterthought and not necessary because, like I said, the mystery plot was strong enough on its own that it seemed misplaced.

Have you read this novel? Want to get your book feature? Contact me!

Title: Tightrope
Author: Amanda Quick
Pages: 309
Where to Purchase: Amazon, Barnes and Noble, Target, Books A Million
I rate it: 3/5