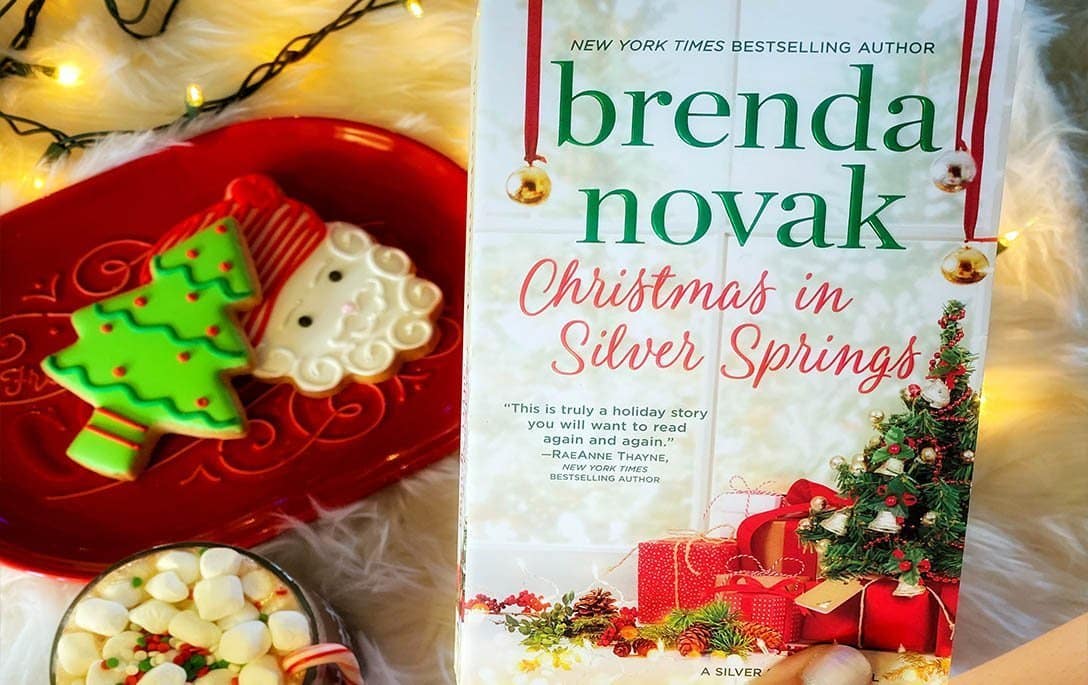 Haul out mistletoe because Christmas in Silver Springs by Brenda Novak will have you wanting to find that special someone this holiday season. This novel centers around Harper Devlin and Tobias Richardson. Both couldn’t be more different. Harper comes from a well-off family. She is married to Axel, a famous rockstar who travels the world, and they have two beautiful girls, six and eight. However, her seemingly perfect life unravels at the seams when Axel files for divorce and Harper seeks refuge at her sister’s house in Silver Springs during the holidays.

For Tobias, his life has never been great. He grew up with his brother Maddox, raising himself because his mother was either drinking for taking drugs. It caused Tobias to make a terrible mistake, landing him in prison for thirteen years. Prison changed him, but also the guilt of not forgiving himself for hurting someone changed him. With it being his first Christmas out of the slammer, Tobias is satisfied keeping to himself until he sees Harper Devlin.

Instantly, the two connect, and fate brings them together more than once. Tobias offers his shoulder for her to lean on, but when desire explodes between them. They are taken on a journey that will either heal both their brokenness and shatter it forever. Will Harper learn to feel worthy, and will Tobias learn to forgive? It’s a question you’ll be asking yourself until the very last page. I know I was.

Every page I turned, I kept wanting to know if they had a future. It was hard not to pull for Tobias and Harper because of the pure passion they both had together. I loved it, and I will say the ending did not disappoint. Both proved to be strong characters. Karoline, Terrance, Maddox, Jada, and Atticus all contributed, so did Axel. The way she captured her ex was great in the novel adding perfect tension when needed to move the story along.

My favorite character, though, was Harper. Brenda Novak did a great job of writing the protagonist. Harper was broken in the beginning due to her divorce. She felt worthless, and throughout the story, Axel didn’t help. But Tobias did, allowing Harper like herself again. Watching her become stronger as the pages continued was great. I also really enjoyed how Brenda wrote Tobias. He was caring, a gentleman, never pushing Harper or anyone to something they didn’t want too, even if it meant he took the abuse. Tobias was physically strong but emotionally weak. It wasn’t until the epilogue, I finally felt like Tobias moved on from his past, and it was powerful.

At first, Harper and Tobias’s relationship is mainly physical. I doubted they really connected past that until I saw the gifts, they gave each other for Christmas, and how they gave it to each other. Brenda showed just how deep their connect was through simple gift-giving which I loved. They truly and deeply knew each other, making the reader see true love comes when you least expect it.

Overall, Christmas in Silver Springs by Brenda Novak is a novel I enjoyed. It was unique and heart-wrenching. Both had significant obstacles and heavy burdens. However, seeing them forgive and embrace each other makes you see love can help overcome anything.

“Taking a long-stemmed white rose from inside his coat, he stepped forward to give it to her. “Hang in there. It will get easier,” he said. Then he walked off before she could even ask his name.”

For those that have read the novel, you know the power of this passage. If you haven’t read it, pick it up and then come let me know your thoughts. Below you will find the links of where you can purchase this novel. Want your book featured next? Contact me!